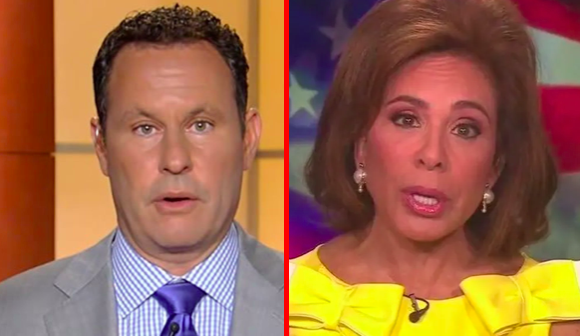 In case there were any lingering doubts that Donald Trump gives preferential treatment to those willing to stroke his ego, this should surely put all questions to rest.

At least two Fox News hosts had their requests for hard-to-get personal protective equipment expedited by the Trump administration, according to the Washington Post.

Six different officials on Jared Kushner’s coronavirus task force say that volunteers were ordered to prioritize requests for PPE from Fox News’ Jeanine Pirro and Brian Kilmeade. Specifically, they were instructed to “fast-track” orders from “VIPs.”

You may be wondering why two homophobic TV hosts were contacting the White House for PPE in the first place, and that is a very good question. The answer is not known.

In early March, Pirro claimed “all the talk about coronavirus being so much more deadly [than the flu] doesn’t reflect reality.” Just a few weeks later, she hounded the coronavirus task force until it finally sent 100,000 masks to her preferred hospital.

Meanwhile, Kilmeade, who praised Wisconsin for holding an election during the middle of a pandemic and said 60,000 dead Americans was a sign of success, contacted two officials within the Trump administration several times about buying the lifesaving protective equipment presumably for himself and his family.

Now here’s the real kicker, according to three of the six sources, the task force used personal email accounts rather than official government email addresses, to coordinate the shipments.

A spokeswoman for Fox News says that neither of the hosts knew their requests were being prioritized.

These latest reports about Fox News personalities getting priority treatment by the Trump administration comes just a few weeks after it was revealed Trump met privately with Laura Ingraham to discuss promoting the controversial drug hydroxychloroquine as a potential cure to COVID-19.