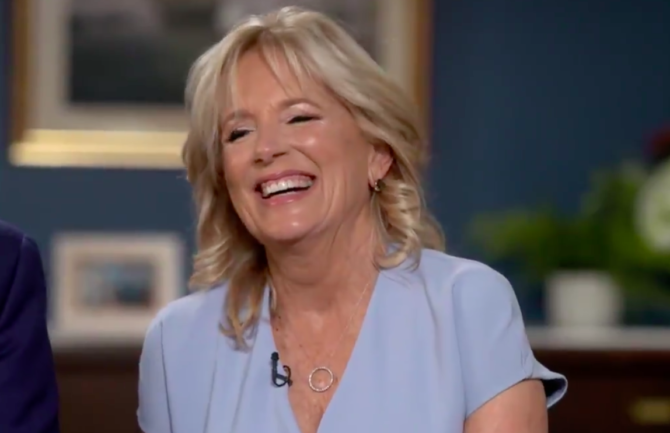 Incoming FLOTUS Dr. Jill Biden could not care less about that stupid op-ed written by Joseph Epstein attacking her for being too educated.

“Jill Biden should think about dropping the honorific, which feels fraudulent, even comic,” Epstein wrote of her use of the title, which she earned when she completed her doctoral degree in education leadership from the University of Delaware.

Dr. Biden initially responded to the op-ed with a tweet, writing: “Together, we will build a world where the accomplishments of our daughters will be celebrated, rather than diminished.”

Together, we will build a world where the accomplishments of our daughters will be celebrated, rather than diminished.

Last night, the Bidens sat down with Stephen Colbert for a joint interview, during which he asked Dr. Biden about the non-controversy.

“That was such a surprise,” she said. “It was really the tone of it. He called me ‘kiddo.’ One of the things I’m most proud of is my doctorate. I worked so hard for it.”

Dr. Biden went on to thank all the people who came out in support of her, saying she was “so grateful” and “overwhelmed by how gracious people were toward me.”

When Colbert asked Dr. Biden if maybe it was a compliment that, when people tried to find something to criticize her for, the best they could come up with was that she’s too smart, the future first lady broke out into a fit of laughter.

TONIGHT! @StephenAtHome sits down with President-elect @JoeBiden and @DrBiden and they respond to the attacks on her doctorate degree. #LSSC pic.twitter.com/HMDGxoaq27

After being dragged for the op-ed, it was revealed that this isn’t the first time 83-year-old Epstein, who received honorary doctorate degree from Adelphi University in 1988, has written an inflammatory op-ed about a topic he clearly knows nothing about.

In 1970, he published an essay in Harper’s Magazine in which he described LGBTQ people as “cursed” and “afflicted without apparent cure,” saying he wished “homosexuality off the face of the earth” and calling all gay people “n*ggers.”