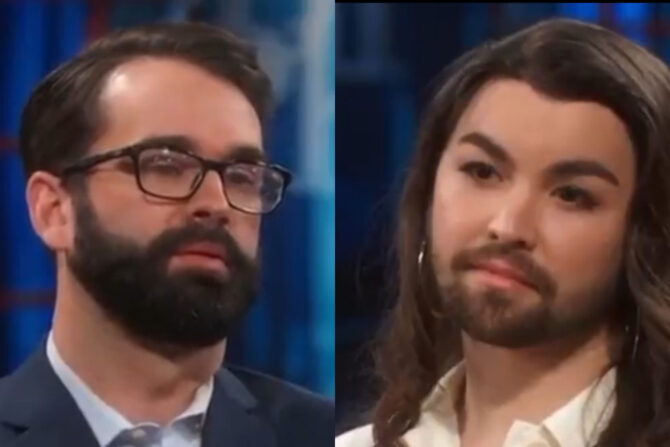 Dr. Phil is in the hot seat following an episode of his talk show featuring conservative blogger and podcaster/anti-trans activist Matt Walsh.

The episode aired on January 19 and featured Walsh, a self-described “fascist,” debating a non-binary couple. Over the course of the conversation, the couple, identified as “Ethan” and “Addison”, argued with Walsh about what constitutes a woman as he accused them of “appropriating womanhood.”

“This is one of the problems with left-wing gender ideology,” Walsh ranted. “No one who espouses it can even tell you what these words mean. What is a woman?”

“You want to appropriate womanhood and turn it into, basically, a ‘costume’ that can be worn.” – @MattWalshBlog pic.twitter.com/7o0bCoyqrm

Later in the exchange, words got especially heated when Addison asked Walsh, “I’m trying to understand. You definition of a woman is someone who is female, is what you said, right?”

“So what happens when you have maybe someone who is female, a cisgender woman, as you just explained, that doesn’t have the ability to reproduce? Maybe she doesn’t have those organs–”

“I have answered the question,” Walsh snapped. “You sit up here and said ‘trans women are women.’ You tell me. What is a woman?”

Related: Dr. Oz’s Senate campaign is an even bigger trainwreck than we were expecting

Addison replied, “Womanhood is something that, as Ethan explained, I cannot define because I, myself…”

“But you use the word!” Walsh interrupted. “What did you mean when you said ‘trans women are women’ when you don’t know what that means?”

“I do not define what a woman is because I do not identify as a woman,” Addison explained. “Womanhood is an umbrella term that describes people who identify as a woman. Each person has their own relationship with their gender identity.”

At that point, the audience burst into applause.

Of course, to anyone who knows him, it should come as no surprise that Walsh came ready to spew transphobic vitriol. He has a long history of transphobia, having authored the children’s book Johnny the Walrus, which compares being transgender to pretending to be a walrus.

He also has a history of homophobia, having called Pride month a “celebration of vanity” and denounced adoption by same-sex couples. He has also defended the vigilante actions of Kyle Rittenhouse, opposes abortion, and claims that doing yoga is anti-Christian, among other things.

Here’s how Twitter is reacting to his Dr. Phil appearance…

Good morning to everyone except “Dr.” Phil & Dr. Oz pic.twitter.com/TQkejeJCRC

I was gonna tweet a joke about Dr. Phil, but even typing "Dr. Phil" is exhausting

You know, Dr. Phil has done a lot of shitty things, but having Matt Walsh on to call trans people delusional and mentally ill *to their faces* is a new low, especially since he frames it as a "debate" with two valid opposing arguments, when it's really just transphobia

Which of the Seven Seals is Matt W*lsh appearing on Dr. Phil to talk about gender/transgender pronouns?

Matt Walsh did a good job on Dr. Phil but it was better when Milo was doing it.

Say what you want about Ellen.

At least she didn't invite a bigot to speak on her show like Dr. Phil did.

Matt Walsh shouldn't be given a platform to spread his transphobic rhetoric.

Matt Walsh was invited on Dr. Phil to discuss gender issues, which tells you everything you need to know about both of them.

Matt Walsh going on Dr. Phil talking about his seal book is the most absurd video ive seen… comparing them to animals is such a disgusting thing to do, he just wants to hate trans people and degrade the trans community as a whole.

Please don't ever live tweet during RuPaul's Drag Race & act like an ally again if you are going to have people like Matt Walsh on your show spreading transphobia to the masses.

Sincerely,
The LGBTQ community and their real ally's.

I see "dr" Phil continues to have white supremacists on his show. Oh an his wife is having a "pick-up artist" MRA on her podcast. How very "girl boss" of her. When is Oprah gonna answer for what she unleashed?

Between Dr. Phil and Dr. oz, Oprah really did us dirty. Nobody’s perfect

Today I learned:
1. Dr. Phil is still on the air (????)
2. He invited self described theocratic fascist Matt Walsh on his show to debate non-binary people about their existence.
Fuck both of those guys for their fear mongering and treating trans/non-binary people as a spectacle https://t.co/R8epHnkErk

Subscribe to Queerty for a daily dose of #entertainment #dr.phil #mattwalsh stories and more