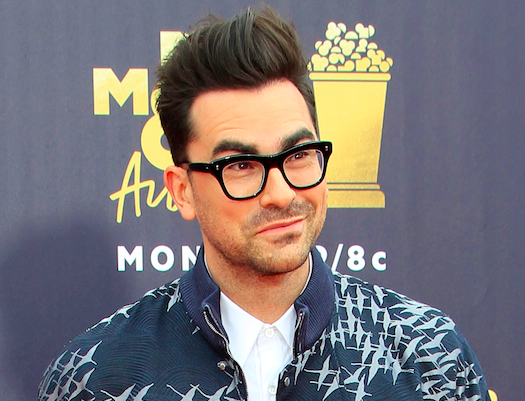 When it comes to Dan Levy, it’s always a good day to talk some Schitt.

Levy was featured in 2019’s Pride50, but he accomplished something so amazingly historic this past year that we had to include him again. (Also, we just love him!)

Even more buzzworthy than awards was Levy’s approach to the show, which he has spoken about over the years.

In 2018, he revealed that no storylines about homophobia would ever happen in Schitt’s Creek, something he described as the “the only political stand [he’s] taken as a showrunner.” It was his way of not  giving power to prejudiced perspectives, he said.

Speaking at a cast roundtable, Levy said, “We learn by what we watch. And even if you’re presenting someone who puts out that energy, there is someone who will watch that and side with it.”

Also important to Levy was avoiding gay television tropes–particularly when it came to one of the show’s most beloved couples David, who identifies as pansexual, and Patrick, who is gay.

“The majority of queer stories that are told in film and television [end] in tragedy, sadness, or heartbreak,” Levy recently shared. “So for me, it was really important that we tell a story, a love story that was completely free of the presumption that so many of us put on queer relationships that we see on screen, [where] we’re just like almost waiting for something bad to happen. And it was a freedom for me to say that is [not] going to happen.”

The effort clearly paid off. In addition to sweeping last year’s Primetime Emmy Awards, Schitt’s Creek remains a beloved series for its groundbreakingly subtle treatment of LGBTQ relationships to this day.

And in February 2021, he received widespread acclaim for hosting Saturday Night Live, which included a must-see sketch that absolutely skewered over-the-top “men’s” beauty marketing, advertising ‘Skin Ammo by Man Stain’–a line of makeup products for guys who are “too masculine” to buy makeup.

Dan Levy gives us pride for an abundance of reasons–from his historic Emmy wins, to being an amazing representative for the LGBTQ community, to his ability to make us laugh, and cry, and laugh until we cry.