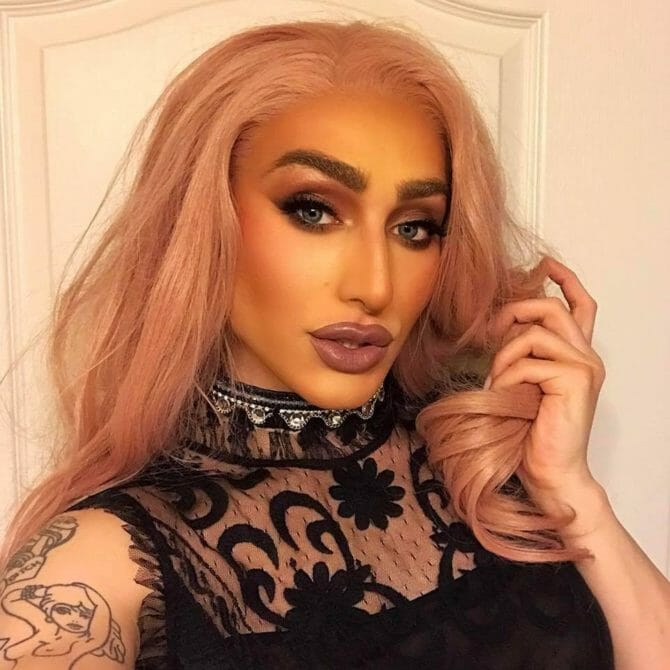 New York City-based drag queen Biblegirl has a made a name for herself without being on RuPaul’s Drag Race. The self-proclaimed “internet reality trash” is the CEO of Drag Queen Merch, a company that helps queens like her turn a profit from their merchandise. She successfully got her company’s product into Hot Topics around the country, and while she isn’t busy helping queens chock their goods, she also performs around the world.

Well, it seems like Biblegirl has been taken advantage of by a promoter, and she isn’t going to be quiet about it anytime soon. The “meme-queen” is alleging that an Australian promoter, Kweer Touring and Events, failed to follow through on their contract, and owes her almost $4,000 in coin.

Biblegirl first tweeted, “Not really sure how to start this THREAD other than: @KweerTandE currently owes me a remaining $3,750 USD. I am not throwing out a number as a means of bragging, but to anchor the situation at hand and to drive home the point of how serious and unfair this is.”

In the thread, Biblegirl points out that while she hasn’t been paid in full, other Drag Race girls have been. “I have since been in contact with my management team and they’ve been looking into the situation,” she reveals. “Two other girls repped by one of my respective managers have both been paid in full. I am the outlier. You know what else I’m the outlier in? Not being alumni from Drag Race.”

We had to find out more, so we direct messaged the queen, and here’s what she told us.

“It was a two week’s duration tour in Australia, a couple of city dates leading up to the Queerexpo event,” she tells Queerty. “Tour was called ‘Beauty & The Beats’ Tour. The line up included BenDelaCreme, Ongina, Morgan McMichaels, myself, @allaboutfka, Hungry, and domestic hostess Bebe Gunn.”

“QueerExpo included above lineup along with Mayhem Miller, Mariah Balenciaga, and Vicavious. All of us got on well for the tour— contract said we were supposed to be paid half of pay in a deposit towards the beginning of the tour if not TWO weeks prior to tour initiating.”

“We were supposed to be paid in person on final day of QueerExpo but promoter Pete had wound up convincing all of us it would come later,” she explains. “We’re nearly a month out now from end of tour and still no pay. When I inquired directly, I was given the bogus fraud story which is detailed in my pinned tweet. Which now it’s coming to light those documents are forged and don’t even have the proper letterhead.”

“He has been deleting comments on any of his pages pertaining to paying me along with other performers such as FKA who has gone public. Other people workin events such as QueerExpo or DJ’s from specific cities are all now coming out and saying their payout is MIA too. Still haven’t heard from him since calling attention to it. Last I heard was when he texted me convoluted fraud story last week.”

Kweer Touring and Events is owned by Peter J. Smith. The company is currently promoting a tour with Vanessa Vanjie Matteo, the breakout star from Drag Race season 10. Many of Biblegirl’s fans are trolling the posts promoting the upcoming “Vanjie Ball,” asking how are they going to pay for Miss Vanjie when they still haven’t paid Biblegirl what she is owed.

Other queens are taking to social media to corroborate Biblegirl’s allegations. Drag Race season 1 legend Ongina tweeted, “I was with @KweerTandE, @BibleGirl666, @allaboutfka and a few others and I’m really disappointed with Pete for not paying ALL the girls the minute they ‘clocked out!’ I’m joining this conversation to support my friends and encourage @KweerTandE to do the right thing. AND NOW!”

UPDATE: Biblegirl asked that this comment below be added to this article.

please note: well after this interview @isshehungry, along with now what turns out to be many others on the tour and working the expo remain unpaid as well. It isn’t as microscopic as I initially perceived from information gathered with it to be just us girls off the race. https://t.co/9kKs1f3udn