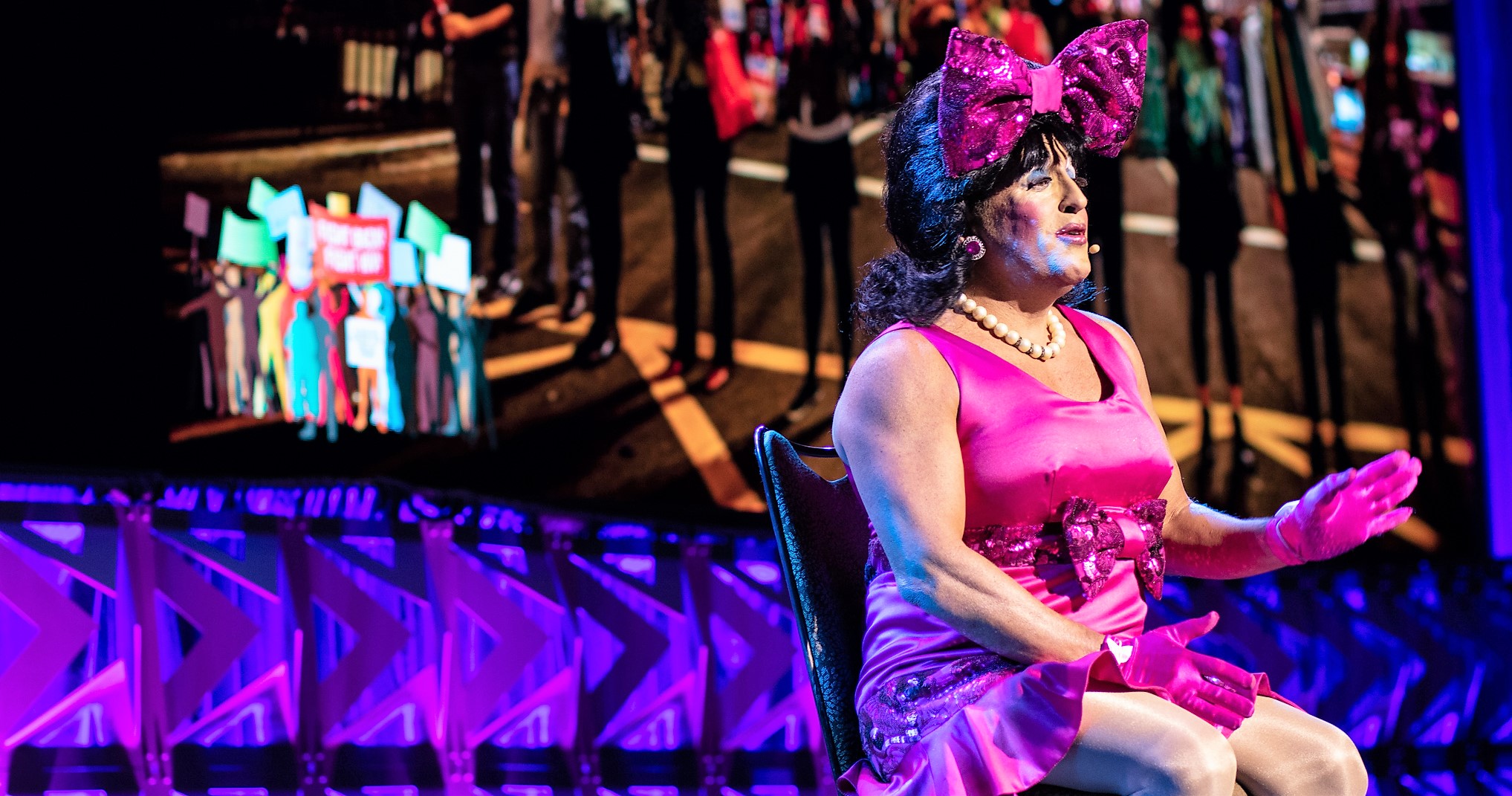 The Kinsey Sicks have been at this a long time. The acapella singing group of gay men in drag are celebrating 25 years of performing shows that are equal parts camp comedy and very of-the-moment political humor.

Benjamin Schatz is an original member of the group, appearing as his drag alter ego Rachel, a character with a penchant for putdowns and a lust for the spotlight.

But there’s political humor and then there is true, mortal heartbreak.

Benjamin, who writes much of the shows and lyrics, had something important to say, something that had weighed on his mind for many years.

He decided to get it off his padded chest during The Kinsey Sicks’ most recent show, “Things You Shouldn’t Say.” In a monologue performance during the show that is as wrenching as it is delicate, Benjamin takes the risk of breaking character to explain what the early years of AIDS have done to him and his community.

“When Trump won, I thought ‘oh shit, I have to write a different show than I have been planning on,’” Benjamin explained after a performance at the 2018 United States Conference on AIDS in Orlando. “I just went into some deep place inside myself because I knew we can’t play by the normal rules now.”

Breaking those rules meant abandoning, at least for a few moments, the pure comedy that makes the outrageous show such a satirical delight. “When we opened this show I was terrified,” Benjamin said. “But I just felt like this monologue was what I had to do.”

“It was a tectonic shift in the show. But it’s been one of the most rewarding things I’ve ever done.”

The response has been overwhelming. “One of the amazing things about doing this monologue,” Benjamin said, “is that we have done this show for all kinds of audiences, from LGBT people to straight senior citizens to young people in Scotland, and it resonates.”

That includes the more difficult, emotionally searing elements of the monologue, such as the statement that “people wanted us to die.” Benjamin says that kind of sentiment isn’t shared very often, but he knows down deep that it was true – and how it eventually morphed into greater empathy for dying gay men. “People wonder if gay marriage came from Will & Grace,” Benjamin explained, about the roots of queer acceptance in this country, “but no, it came from hundreds of thousands of dead faggots. That’s where gay marriage came from.”

The Kinsey Sicks have always been political – Benjamin believes it has hurt the career of the group but they wouldn’t have it any other way — and there has even been HIV content in the show before (they once did a parody of the Jackson Five song, “ABC,” called “AZT”).

This monologue, though, is something else entirely, and it deserves to be seen and shared. Grab a tissue and take a look. And, if you’re lucky, check to see if your city is on their current 25th Anniversary Tour.