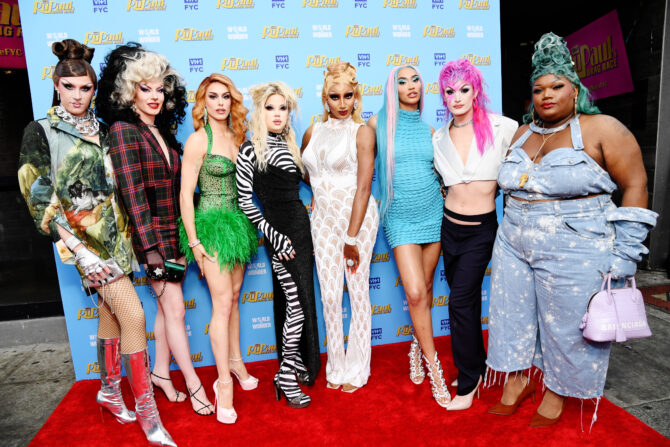 We’re used to our Twitter feeds overflowing with hot takes about Drag Race—who should’ve sashayed away, who was robbed, who deserved the lead role in the Rusical—but these days it seems like everyone has opinions about drag. And, as usual, no one has any idea what they’re talking about.

Case in point: There’s a wave of conservative politicians who want you to believe that drag is dangerous, “perverted,” and harmful to young audiences. Though it’s easy enough to brush off, the wrong-headed sentiment has been swelling this Pride Month ever since Texas lawmaker Bryan Slaton announced his intent to introduce a bill that would ban drag shows in the presence of minors.

(Not for nothing, the gun-loving Slaton announced this mere weeks after the horrific mass shooting in Uvalde, TX claimed multiple lives. Can you say “diversion tactic?”)

Other conservatives aiming to appease the weary and worried masses have followed suit, making it clear that none of these folks have actually been to a drag show before. Or, if they have, they’re just denying it outright. It’s an awful lot of nonsense.

At a recent “For Your Consideration” event for the 14th season of RuPaul’s Drag Race in Los Angeles, Queerty had the chance to catch up with much of the talented cast, so we gave them the opportunity to comment the proposed drag show bans and restrictions. In typical Drag Race fashion, these queens did not hold back with responses that were both hilarious and thoughtful.

In other words, get ready for some shade because the library is open. Here’s what the queens of RuPaul’s Drag Race season 14 had to say…

“I think they’re jealous that they don’t get to live as freely and fiercely as we do. We do have something in common though: I don’t want their f*cking kids at my drag shows either! So, while I don’t think that needs to be a law—because I feel like we’re veering into territory that doesn’t allow people to be themselves—I’m in agreement. We don’t want your stinky kids at our shows!

But I feel like, as we gain more and more visibility and more and more of a platform, the target on our back grows. And they’re just reusing the same arguments that have been used for years and years and years to discriminate against the most vulnerable of minorities. And they just recycle the argument every decade, [they] pick a new person to pin it on, and they do it to distract people from whatever they are currently doing. They want poor people to be mad at other poor people, that way they can create new wars, they can create new financial obstacles to keep people poor. This is all a part of their plot—we see through you! We just have to see the pattern and do better. We have to do better.

There’s a lot of situations and places that kids end up going to that can negatively influence them. So, if you want to start critiquing, and get into splitting hairs about stuff, you need to keep them kids out of the Vatican too, b*tch! I don’t hear them talking about keeping kids at a church!

So, you know, you’ve got to use a little common sense. Yes, if you are concerned that there might be a little bit of adult content, number one: These children grow up in an adult world—you cannot control what these kids see out here. Kids already know there’s no Santa Claus long before they ever catch you slip down to the chimney to get the cookies and give them the gifts. So you might as well just give them the reality. It’s always better to keep kids feeling supported, embraced, and educated than to hide them away and make them feel like they’ve got to suppress things. Because that’s how you get problems, okay?”

“The thing about it is, you can’t stop us. People try so hard to stop who we are and what we’re doing and build gates around us—you can’t do it. Like, at the end of the day, what we do as queer people in our spaces is free expression, and everybody should be able to express themselves to the world. Like, I don’t care who it is, but that’s crazy. That’s absolutely crazy.”

“Well, I could say a lot of things to those people and, trust me, I don’t edit myself very well!

I would say that there are a million and one things you need to worry about before you worry about drag artists. And what I think is so strange is people that don’t understand drag—it’s like, you can’t tell somebody they can’t paint a picture! It is an art form and I think people are just uneducated about what drag truly is. And people are scared of things they don’t understand. So I think it’s all about teaching and becoming knowledgeable. The more somebody learns about something, the more comfortable they’ll be with it.

But I mean, come on, baby, we have people being crazy out in public—being here, there, and everywhere—things that need to be taken care of before drag. And also, at the end of the day, we don’t want children—that is not our number focus at a drag show! I mean, they don’t have money to tip us, so! What are they going to tip us, a crayon?”

“Well, I would say to those people “f*ck you!” But I really shouldn’t be asked questions like this because I’m an anarchist, and I just think we should throw all these politicians in a prison. Long story short, I’ve got a pretty aggressive view towards people like that, and I hope they’re making their peace.”

“I honestly feel like people are just afraid of what they don’t know—they’re afraid of the unknown. So, maybe try going to a drug show and seeing what’s up. We’re not interested in, like, terrorizing children. We don’t care about children, really, we just care about looking fabulous and making money and having a time! [Laughs.] I do drag because it’s a freedom for my inner child in a way. As a kid, I always wanted to be this fabulous, this brave, this feminine, maybe this masculine, too. And I never got a chance to actually do that until drag. Drag is literally freeing me!

Some people will use any trauma that they’ve had in their lives and then make fun of it with drag Some people use it as a way to maybe scratch an itch that they’ve always wanted to scratch, or just to get over some other fear. There’s some kind of healing or nurturing part of drag that makes us feel better afterwards. And I feel like every kid can use that! Especially kids that come from a broken home or unsupportive parents or family. Drag should be healing and fun—it should never be taken too seriously.”

bring the beat in
19 comments

All about the WLW Pride Flag