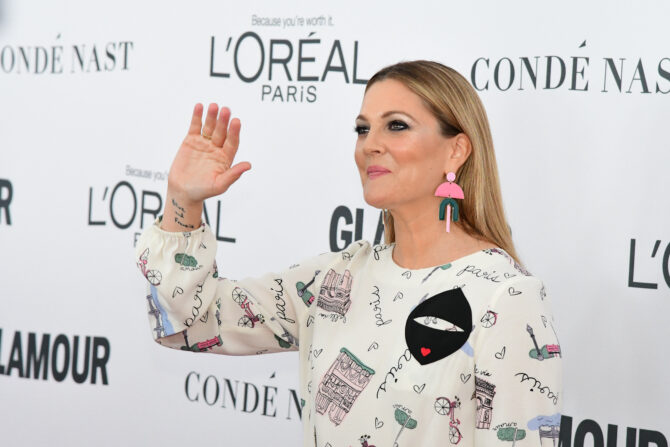 If you know anything about sapphics (that is, women who love women), you’ll know that the Norwegian singer Girl in Red has become something of a lesbian icon. Last year, the question “Do you listen to “Girl in Red?” became a popular meme, appearing as a kind of shorthand for when you want to ask a girl if they’re attracted to other girls.

So, when actress and talk show host Drew Barrymore revealed that she was listening to Girl in Red in a TikTok in late 2021, it only reignited long-standing questions about her sexuality. Let’s take a closer look at the speculations and finally answer the question, “Is Drew Barrymore gay?”

RELATED: Elliot Page is about to spill some major Hollywood tea

Drew Barrymore has been the subject of persistent rumors about her sexual orientation for years. It’s hard to pinpoint when these rumors began exactly, but they can perhaps be traced to the actress’ vocal support of the LGBTQ community.

Back in 2009, Barrymore was spotted at a marriage equality rally in Los Angeles following the California Supreme Court’s vote to uphold the anti-gay Prop. 8. At the rally, Barrymore told reporters, “I am who I am because of the people who influenced me growing up, and many of them were gay. No one has any right to tell anyone what makes a family. You choose your battles in this world. If you fight for everything, you’re just someone on a soapbox. This is something that means everything to me.”

The following year, Barrymore was awarded by LGBTQ media monitoring organization GLAAD the Vanguard Award for being an outspoken advocate for gay rights. She was also tasked to host the 24th GLAAD Media Awards in 2013, delivering a touching speech on growing up without a “traditional family” and how that experience taught her that “’family’ is a society definition, and you live it; you find it; you create it.”

But is the Never Been Kissed star merely a fierce ally? Or does she consider herself part of the LGBTQ community?

There have been numerous instances over the past years that have raised eyebrows about the actress’ sexuality, including a “curiously intimate” chit-chat and photoshoot with co-star Elliot Page for Marie Claire magazine. The shoot, which was done to promote Barrymore’s directorial debut Whiplash, included a photo of the pair locking lips. Throughout the interview, Barrymore also gushed about Page’s “beautiful body”.

The actress has never been mum about her celebrity crushes, in fact. In 2011, at CoverGirl Cosmetics’ 50th anniversary party, Barrymore revealed that she was crushing on MSNBC host and lesbian icon Rachel Maddow.

So, Is Drew Barrymore Gay?

People who continue to speculate on Drew Barrymore’s sexuality – pointing to all the aforementioned instances as “evidence” – are missing one crucial piece. The actress has actually already spoken up about her sexual orientation way back in 2003.

In an interview with Contact Magazine, Barrymore confirmed that she is bisexual. “Do I like women sexually? Yeah, I do. Totally. I have always considered myself bisexual,” the actress said.

To call Drew Barrymore an icon is an understatement. The former child actress has been in some of the best rom-coms of the late 90s and early 2000s, portrayed a kick-ass detective in the Charlie’s Angels film franchise, and even hosts her own talk show, The Drew Barrymore Show, which Vanity Fair once praised as one of the “most fascinating daytime viewing around”.

Aside from her impressive body of work, Barrymore has also been a fierce advocate for LGBTQ rights and has always been vocal about her bisexuality and her appreciation of women.