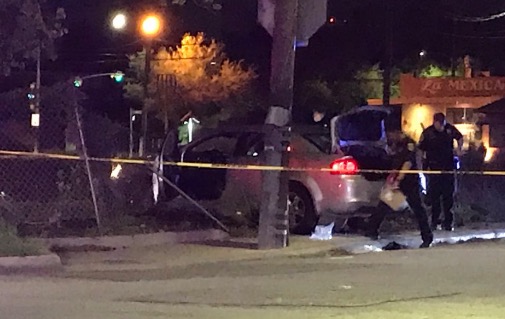 A man drove his car into a crowd of pedestrians outside a Houston gay bar Wednesday night, killing one person and injuring at least four others.

25-year-old Cordale Robinson accellerated through the busy parking lot outside Bayou City Bar & Grill at around 2 am in the queer-friendly Montrose neighborhood.

“It just appeared out of nowhere and he just came in and started hitting and running over people and dragging people and tearing up people’s cars,” a witness to the attack, Teanna Macintosh, told The Houston Chronicle.

“It was just blood everywhere,” she added. “It was so sad.”

According a friend of Robinson and the owner of the car, Caltrell Jones, Robinson was attacked by a group of people over a cellphone before getting into the vehicle.

Jones told local news his friend did not intend to hit anyone — that he was merely trying to get away from his own attackers.

“He lost his phone in the club. He asked a couple people, ‘Have you seen my phone?’ and I guess they didn’t like the way he asked. So, when we left the club, that’s when they approached him, ‘So, what were you saying the club?’ And then they jumped him,” Jones told KTRK.

Police, however, say the collisions were intentional, and that Robinson drove through the parking lot at least twice.

Robinson was charged with aggrevated assault and murder and taken to a nearby hospital.

“I’m sorry that happened to the guy. I really am. But my best friend has good intentions. He didn’t do it on purpose,” said Jones. 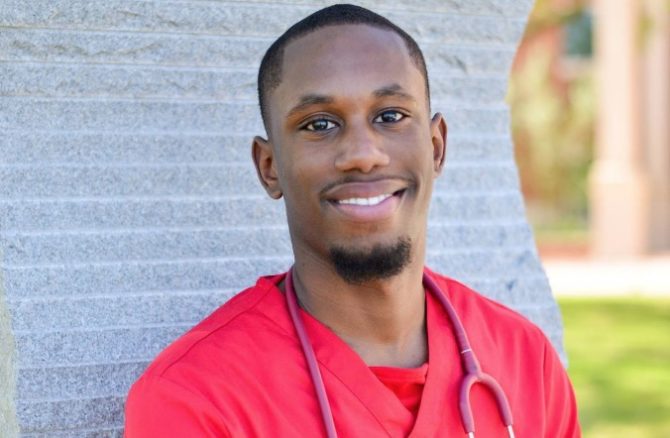 25-year-old Jared Jacobs (above) suffered the brunt of the violence and was eventually pinned underneath the stopped car. He was pronounced dead at the hospital.

Jacobs recently graduated from nursing school and was working at Houston Methodist as an ICU nurse.

“He just graduated from Lamar University,” Edwin Lopez, a friend of Jacobs, told KTRK-TV. “We decided to go to college, make something of ourselves and we decided to come out and just have fun, you know and then this happened.”

“With deep sadness, we learned of the death today of Jared Jacobs, a nurse in Houston Methodist San Jacinto Hospital’s ICU, following a tragic incident early Thursday morning in Houston.

“Jared’s life was taken after a vehicle hit several people in the parking lot of a Montrose area business. Jared was an eager recent graduate of nursing school who was already an incredible asset to the ICU. His colleagues describe a bright smile and welcoming personality that lifted everyone around him.

“Jared, 25, began his nursing career as a new graduate nurse in the ICU and participated in the summer 2017-’18 Nurse Residency Cohort. He quickly became an invaluable member of the ICU staff because of his superb nursing skills and dedication to his patients. His eternally positive outlook and wonderful sense of humor made him a favorite of patients and co-workers alike.

“At times like this, the Houston Methodist San Jacinto Hospital family must hold each other up and keep Jared’s family in their thoughts and prayers.”