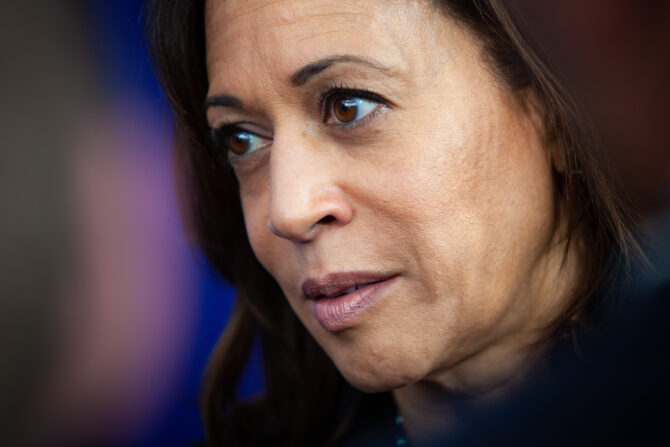 But before you take another sip of coffee and move on with your day, there’s apparently… more to this story?

There isn’t, but Politico has now classified the VP as “bluetooth-phobic,” suggesting her choice of in-ear audio may be “a bit paranoid.”

“She has long felt that Bluetooth headphones are a security risk. As a result, Harris insists on using wired headphones,” the site reports, citing conversations with three former campaign aides.

One of the article’s writers, Alex Thompson, backed it up on Twitter with photographic “evidence”:

NEW: Kamala Harris has long felt that Bluetooth headphones are a security risk.
So, she insists on using wired ones, 3 fmr campaign aides told @rubycramer and me.
That Bluetooth phobia remains (if you look closely, you'll see the clump of wires in hand)https://t.co/9poyMTQrU2 pic.twitter.com/HtscTWm1sF

The bluetooth-phobia remains! A “clump of wires”!

“Should someone who travels with the nuclear football be spending time untangling her headphone wires?” the piece asks, before declaring: “The American people deserve answers!”

Phobia??? Bluetooth is a well-known security risk—including the possibility of escalating and executing code—well, malware—on the phone. Strongly suggest talking to cybersecurity experts—or even a Dr. Google consultation—before running such stories. https://t.co/ZUSHnS3wIa

And surveillance/privacy expert Bryon Tau of The Wall Street Journal added: “Bluetooth peripherals are a security risk. If they don’t rotate their unique identifier, they can easily be sniffed and tracked. If there are flaws in the security, they can be compromised. Most people don’t have to worry about these things, but high-level federal officials should.”

The general reaction to the article was less technical but equally annoyed. Here’s what people are saying:

What a surprise that the folks who were obsessed with the national security implications of Hillary Clinton's email server are now pushing that VP Kamala Harris is being "paranoid" for declining to use Bluetooth tech because of its security vulnerabilities.

Imagine if she did use Bluetooth headphones: “Kamala Harris drops $225 on AirPod Pro earbuds!”

I'm sorry, let me attempt to summarize this: VP Kamala Harris is now being criticized for using wired headphones instead of Bluetooth because she's worried about security risks and this is bad because… we don't want a Vice President who goes the extra mile in national security?

The Kamala Harris “Bluetooth scandal” is just further evidence that it was never “but her emails,” it was always “but they’re females.”

ANOTHER day of journalists painting VP Kamala Harris as a Salem witch because she loves a good crockpot and prefers not use Bluetooth. #morningjoe #KamalaHarris pic.twitter.com/lncJ2FpKdX

Not going to link to it, but @AlexThomp's story on Kamala's alleged "Bluetooth phobia" is some seriously embarrassing n00b nonsense. Even I know that Bluetooth has security issues. Does @Politico miss the days when Trump officials called their Russian minders on burner phones?

"Republicans are a weaponized, radicalized death cult who are taking a sledgehammer to our democracy."

"Damn. Both sides are extremists."

So is this the dumbest political “scandal” of all time?

Perhaps, perhaps not — Obama’s tan suit has its own Wikipedia page.