There are many contenders for the title of “first gay person in history.” Both ancient Greek and Indian literature are laden with tales of same-sex relationships and characters who identify as a “third sex”. Archaeologists also continue to find evidence of prehistoric men buried with women’s clothing or tools, as well as male lovers laid to rest side-by-side. These can perhaps be regarded as some of the earliest recorded instances of queerness and queer love.

Below, we take a closer look at these early examples, as well as try to understand what society might have been like for LGBTQ people of the distant past.

RELATED: History buffs list their favorite facts about queerness through the ages

Who Was The First Gay Person In History?

There’s no one answer to this question, as people who had same-sex relations and those who identified as a kind of “third sex” have existed throughout history. Examples of this can be found in ancient Greek and Indian literature – from the Sacred Band of Thebes, a military unit that consisted of pairs of male lovers, to the sexually fluid Mughals, a noble class from Central Asia.

But recent archaeological finds have shown that there is some evidence pointing to potentially gay and trans life that may have thrived thousands of years before the writing of these tales.

A Man Buried In A Woman’s Grave

In 2011, archaeologists in the Czech Republic discovered a grave that many have purported to belong to the “oldest known homosexual or transgender person”. The grave contained a male skeleton dating back to the Copper Age, or 2900 to 2500 years ago.

This male skeleton was found surrounded by items that were only previously found in graves reserved for females. In place of the typical axes and flint knives that male skeletons were typically found to be buried with, this grave lay beside domestic jugs.

As such, some archaeologists believe that this man could be the earliest example of a gay man or transgender woman, which was likely regarded as belonging to a “third gender” at the time. 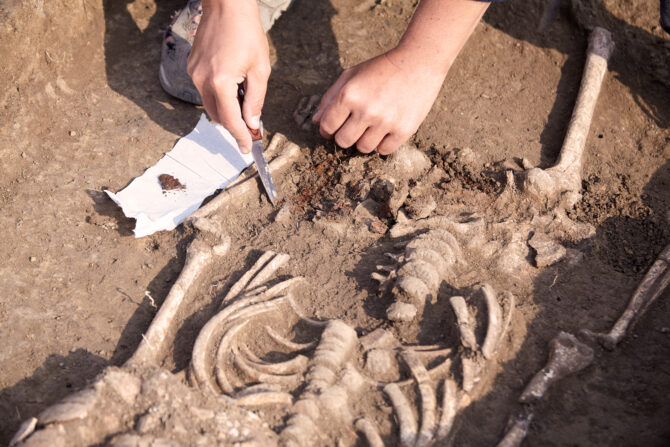 Knumhotep and Niankhkhnum are often regarded as history’s first gay couple. Discovered in 1964, the male couple was found to be buried together in a tomb in Saqqara, Egypt. Within the tomb, archaeologists found various depictions of the two in seemingly intimate poses. For example, hieroglyphs decorating the tomb walls show the two men face-to-face with noses touching and holding hands – poses that were often used to depict married couples.

Knumhotep and Niankhkhnum were believed to be supervisors of the King’s manicurists and had their own families and children, which were sidelined in the glyphs.

The First Man To Publicly Come Out

Fast forward to more recent history and you’ll find Karl Heinrich Ulrichs, a pioneering gay activist who is often regarded as the first man to publicly come out as gay. Even before the term “homosexuality” was coined, Ulrichs had written extensively about homosexuality. As the NY Times reported, in a series of pamphlets he wrote from 1864 to 1879, Ulrichs helped to “forge the concepts of gay people as a distinct group and of sexual identity as an innate human characteristic”.

In 1867, he also delivered a speech at a meeting of the Association of German Jurists to address rumors about his own same-sex love affairs, as well as to appeal for the decriminalization of sodomy, which at the time encompassed same-sex acts between men across a handful of German-speaking kingdoms.

Although we may never know for sure who the first gay person in history was, it’s interesting to explore all of the different possibilities.

What we do know is that, throughout history, there have been many brave men and women who have continued to live their truth – whether or not society chose to accept them.

RELATED: Rare artifact from queer history pops up after nearly 150 years… on Google