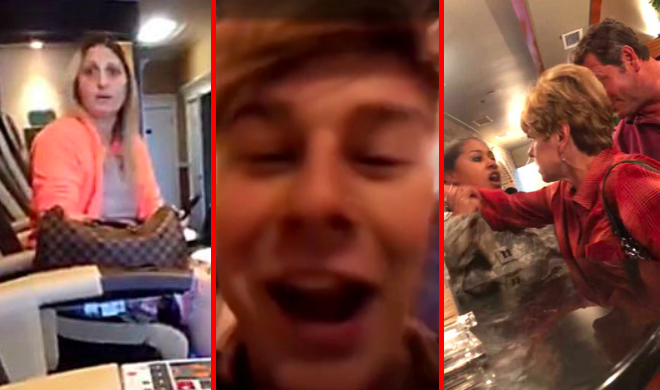 A woman in Lynnwood, Washington was recently caught on camera launching into a vile homophobic rant after a man asked her to turn her cellphone off speaker at a nail salon.

Related: Woman launches into antigay tirade against man getting pedicure, screams “Eat my p*ssy! Eat it!”

The video, which was posted on Facebook last week and has since garnered over 330K views and counting, shows the unidentified woman calling Christopher Brown a “f*ggot, sissy, queer” and claiming that he’s jealous of her having a “p*ssy.”

I’ve been holding back sharing this, but what kind of social justice warrior would I be staying quiet?This situation occurred at my favorite foot spa in Lynnwood, Washington.She then proceeds to engage in a speakerphone / FaceTime dialogue with her daughter. At this point, the staff are irritated as well as the patrons.Being the outspoken gent that I am, I say “mam, would you kindly mind taking your phone off speaker in the spa, pointing to the signs asking patrons to keep their noise down.She looks at her FaceTime call and goes “hold on, I need to take care of this faggot”.And at this moment I was able to record:Please take a minute to view and share this, and know that even in the Seattle region, life isn’t always sunshine and rainbows for the lgbt community. I hope her family and friends see this one day, and are embarrassed by her despicable behavior. There is still work to do folks. #resist

29-year-old Brown says he shared the video on Facebook because he wanted people to see the discrimination many LGBTQ people in America still face on a daily basis.

He told his local news station after the video went viral that “regardless of how you feel about someone, there is a code of human decency to follow.”

“Hateful slurs based on real or assumed identity markers are not acceptable in any way,” he said.

The RuPaul’s Drag Race season 9 queen was on tour in Newcastle, UK in April 2018 when she popped into a Middle Eastern restaurant for some kebobs and was confronted by a drunk woman.

“Slut! … Why are you so gay?” the inebriated woman snarled. “You’re a walking STD!”

Video of the incident was uploaded to Snapchat, where it quickly went viral. Farrah later issued a statement on Twitter saying she still had an “amazing” time in Newcastle and wasn’t going to let a “homophobic twat” ruin her good time.

That white trash guy from Portland

So this just happened. After he sped up like he was going to hit is as we crossed the street. And then a “good guy cop” rolled up and CLEARLY did not want to help us. Before he even got out of the car he was telling us to ignore him and just walk away. Then told us he couldn’t do anything. These little fuckers live around the corner. It will take them no time to figure out which house is ours so I guess we wait until we are physically assaulted before we can get help.

Last July, a white trash guy from Portland, Oregon was caught on camera shouting homophobic abuse at a lesbian couple as they tried to locate the owners of a lost dog.

The drunken douchebag in Winnipeg

i fucking hate homophobic losers, let’s put that on the record!! pic.twitter.com/2D5AdiOpiW

Reese Buhr flew into a rage after being denied entry into a nightclub in Winnipeg, Canada in November 2018. It all started when the club’s bouncer overheard him using antigay language in line and told him to leave. Buhr responded by whipping out his phone and recording a video about how he “f*cking hates gays.”

Related: Watch this drunk man’s homophobic rant after being denied entry into a nightclub

The McDonald’s maniac of Coeur d’Alene

52-year-old Richard Sovenski was arrested last July after he was caught on camera calling a group of teenagers “f*cking little f*ggots,” “f*cking half-breeds” and “f*cking n*gger wannabes” outside of McDonald’s in Coeur d’Alene, Idaho.

The high schoolers, who were part of a church youth group, had stopped into the fast food restaurant for ice cream after an evening prayer meeting when Sovenski lodged the attack, telling one of them, “I will f*ck you up in a f*cking heartbeat, you f*cking little f*ggot!” as he violently rubbed his own genitals.

And let’s not forget Judy Tucker, the 72-year-old art teacher from Macon, Georgia who attacked two female soldiers, one of whom was pregnant, after she says they “got in her way” in the parking lot of a Cheddar’s family restaurant in April 2018.

Tucker and her son were recorded verbally abusing the soldiers, calling them “gay black bitches” and asking “Does the military let lesbians serve?” before things turned violent. Police were called and Tucker was carted off to jail sobbing. She was later charged with assault and banned for life from Cheddar’s.