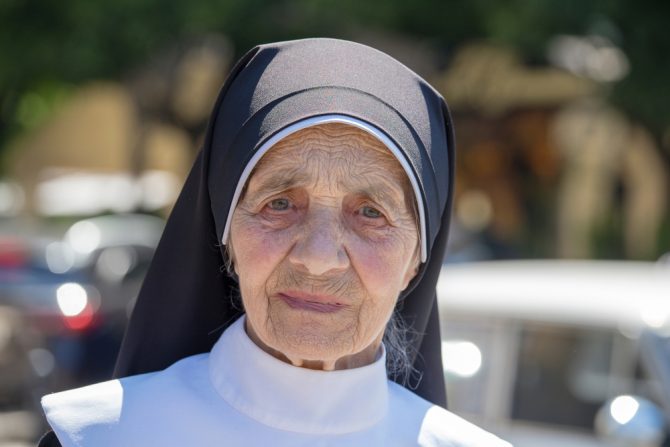 A California woman has just been indicted on federal charges after she allegedly threatened to kill an elderly nun and blow up the church at a Catholic girls school for being too accepting of LGBTQ people.

According to court documents filed this week, shortly after Georgetown Visitation Preparatory School, a private girls school in Washington, D.C., announced it would begin including same-sex wedding announcements in its alumnae magazine, a nun who graduated from the school in 1948 received terrifying phone calls.

Sonia Tabizada has been charged with making threats against the school, which was founded in 1799 and serves about 500 students in grades 9-12.

The calls came in the wee early hours of May 15, 2019, two days after the school issued a letter saying it would begin recognizing the marriages of its LGBTQ alumna.

“We reached this decision as a school and Monastery leadership after much prayerful consideration and thoughtful dialogue,” the school had said in the letter.

It was a welcome mark of progress for many. But not all.

At 5:15 in the morning, Tabizada allegedly called the nun and said that “sinners” must be kept “separate” and that if the school didn’t immediately remove LGBTQ people from its magazine she would burn down their church.

She continued, “Remove the f*ckig gay motherf*ckers from your magazine, or I’m going to f*cking kill your kids. That’s a promise.”

One minute later, Tabizada allegedly called back, this time to say: “What kind of pervert priests do you guys have running the show? Nobody cares for those girls? You’re crushing the innocent, motherf*cking a**hole!”

“I’m gonna f*cking blow up the school and call it a mission from God. You guys are going to get terrorism within your f*cking school, motherfucker. And you’re going to be guilty. And I warned you!”

To make matters even stranger, Tabizada isn’t even an alum of Georgetown Visitation Preparatory School. Nor does she live in Washington, D.C. She’s from California.

“It’s an out of the ordinary case,” her attorney, Carmen Hernandez, says.

Hernandez went on to say her client was being “a little overcharged” and noted that her client has pleaded not guilty to the allegations.

Of course, voicemails and phone records usually don’t lie. But everyone is entitled to their day in court, right?

“There’s no allegation that she took any action or did anything to attempt to carry out the threats,” said Hernandez. “It’s not like she cried fire in a crowded theater.”

The school has declined to comment on the situation.