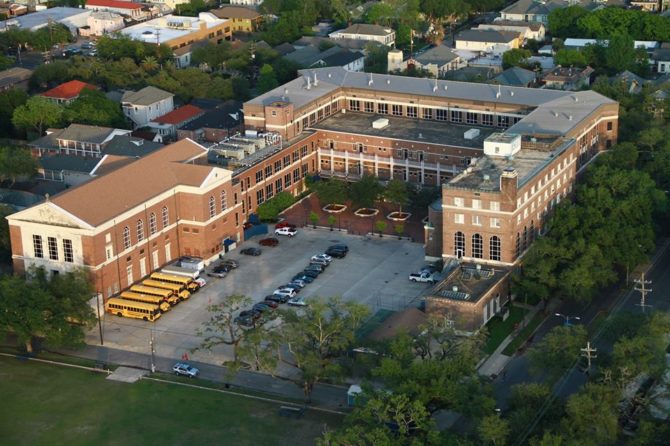 Ricky Windmann says he was repeatedly sexually abused by Peter Modica, a janitor at the Catholic boys school, the New Orleans Advocate reports.

The abuse began in the 1970s when Windmann, now 53, was in his early teens. It began one day when Modica led him to his maintenance office and forcibly performed oral sex on the him.

When Windmann tried to protest, Modica would say it was OK and urge him not to tell anyone.

“If you say anything, who’s your mom going to believe, me or you?” Windmann recalls Modica saying.

According to the New Orleans Advocate:

Windmann said he’s never forgotten the despair he felt the two times other adults at Jesuit witnessed the abuse but didn’t help him.

The first time it happened, Modica was abusing Windmann in the on-campus Chapel of the North American Martyrs.

A lay person came in, someone Windmann didn’t know. That person simply said, “Goddamn it, Pete,” before leaving.

But perhaps the most disturbing incident happened in the campus rectory. While Modica was in the middle of raping Windmann, Rev. Cornelius “Neil” Carr walked into the room.

A priest, Windmann thought, would surely put Modica in his place.

Instead, the priest walked over, put one hand on the middle of Windmann’s back and said, “Relax.”

Six years ago, Jesuit quietly paid Windmann a $450,000 settlement. Around that same time, the school also settled two other sets of abuse claims involving two other former employees. The details of those settlements remain sealed.

Windmann says he’s decided to speak out now after the school failed to disclose his settlement or publicly acknowledge the horrific sexual abuse he suffered while he was a student there.

“We know that there’s systematic and institutionalized abuse of children …and (ending) this should be the top priority,” he says.

“I was born a Catholic. This is my church. We, the parishioners, the abuse victims, need to take our church back, because that’s what Jesus–what God–would want us to do.”

Jesuit High School issued a statement this week saying it couldn’t answer specific questions about Windmann’s case, but it did tout it’s “zero-tolerance policy” on sexual abuse of students.

“Since 2002, the Society of Jesus has worked to rebuild trust, to prevent abuse and to respond quickly to any allegations of abuse against minors,” the statement read.

Meanwhile, the timing of the story couldn’t be more awkward for the state’s antigay Attorney General Jeff Landry.

Two weeks ago, Landry announced that, as a practicing Catholic, his office was not interested in investigating any sexual assault cases lodged against the Catholic Church.