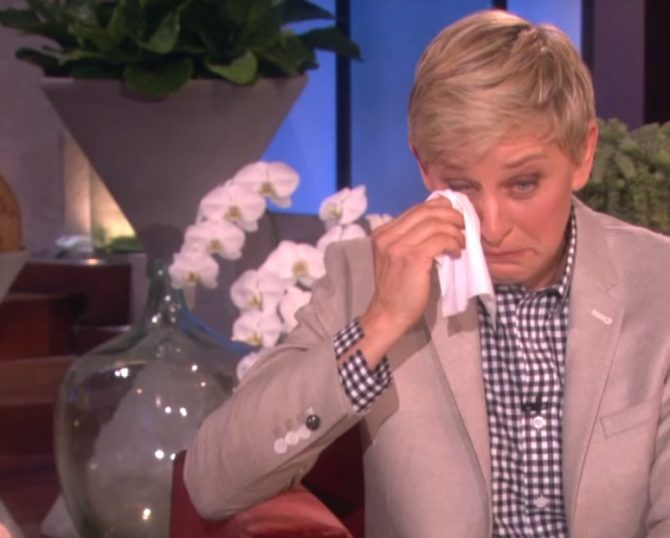 Ellen Degeneres has been at the receiving end of some pretty bad press over the last few months, and while she’s remained tight-lipped about most of it, insiders say she’s “at the end of her rope.”

“She thought this was all just sour grapes from a few haters,” an insider tells US Weekly. “But it’s not a passing thing. The hits just keep coming.”

It all started back in March when several of Ellen’s former employees came forward to accuse her of being secretly mean.

Not long after that, beauty vlogger Nikkie de Jager spoke out about the not-so-warm welcome she received from Ellen when she appeared on her show back in January.

A few weeks later, several of Ellen’s current employees came forward to say that, despite claiming she supported them on social media, she used the coronavirus as an excuse to stop paying them and hire cheaper non-union workers in their place.

Then this month, one of her former bodyguards broke his silence to say Ellen was “demeaning” and “very cold.”

According to another insider, Ellen’s wife, Portia, has been helping to manage the emotional toll the onslaught of allegations have had.

“Ellen’s so grateful to have Portia in her life as a soulmate and a sounding board,” the second source says, “but that doesn’t mean it’s been easy.”

“Their home life is strained right now. … Her real friends never ask her to be funny or tell jokes. They accept her as is.”

Despite all the negative headlines, Ellen’s ratings haven’t been impacted… yet.

“Ellen’s been in our homes for so long, it’ll take a lot more than a bodyguard and a blogger to change how people feel about her,” the second source notes. “Her best response is just being happy Ellen on the show every day.”