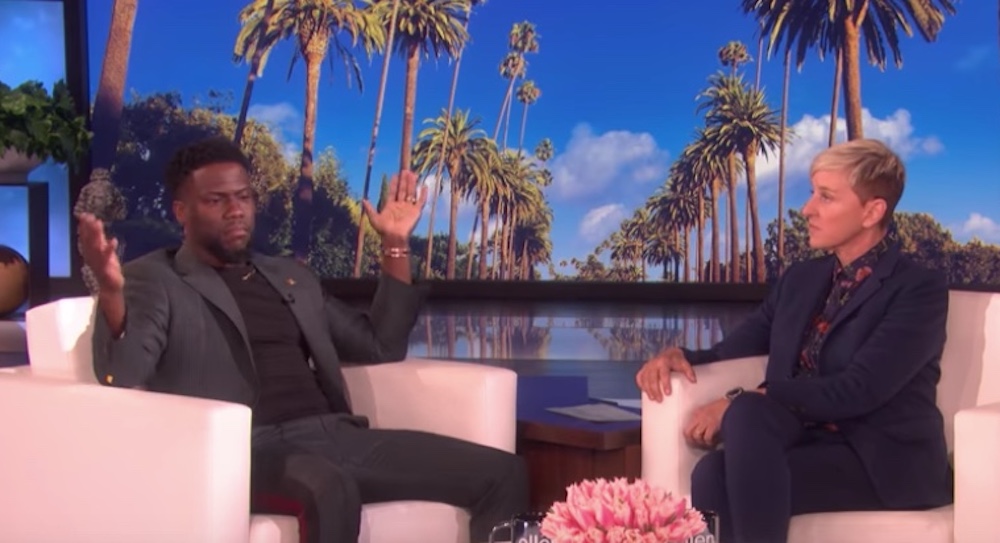 Lesbian day-time talk show host Ellen DeGeneres recently interviewed comedian Kevin Hart about his decision to step down as the host of the Oscars following the unearthing of his past homophobic comments.

During the interview, DeGeneres said she forgave Hart and mentioned that she called the Oscars and got them to accept him as the host, if he wants to return. Hart said he’d consider it.

In the interview, Hart explained that he initially refused to address or apologize for his anti-gay “jokes” because his homophobic comments were 10 years old and “stuff I’ve addressed and… apologized for,” though that remains questionable (as we’ll explain below).

Hart also said he no longer makes homophobic comments in his comedy routines because it’s stupid and hurtful, and called headlines of his “refusing” to apologize for his past comments “slander.” (But they weren’t because they were true.)

When Hart was called out for his past comments, Hart did initially respond by deleting his homophobic tweets. Soon after, he posted two Instagram videos in which he proclaimed his love of everybody and told critics to “Stop looking for reasons to be negative.” In his second video, he flat out refused to apologize when asked by Academy Award organizers to do so.

Hart told DeGeneres that he apologized for his anti-gay comments during press for his homophobic 2015 film Get Hard. But publications never reported any such apologies. Rather, they merely quoted Hart as saying that he wouldn’t make such comments now because “the times [10 years ago] weren’t as sensitive as they are now.”

In a subsequent interview around the same time, Hart explained why he’d never play a gay role, adding, “I have [no] ill will or disrespect [towards gay people].”

Related: Kevin Hart rang in New Year’s with a rapper who officiated a gay marriage

A few hours after posting his second Instagram video, Hart resigned as the Oscars’ host, writing, “I do not want to be a distraction on a night that should be celebrated by so many amazing talented artists. I sincerely apologize to the LGBTQ community for my insensitive words from my past.”

When speaking to DeGeneres, Hart talks as if the social media disapproval of his homophobic comments was its own “malicious attack on [his] character,” meant to utterly “destroy” all of his success. He also acts as if the controversy was unaffected by his actions or response to it, but that’s BS.

DeGeneres told Hart that if he doesn’t host the Oscars, the online “haters” will win. Naturally, her brand is built on kindness, so it makes sense that she’d try and help her friend.

But Hart still sees himself as the victim in this story and he’s obviously still angry at those who called him out, showing that he doesn’t understand his involvement. He had only to apologize to make the controversy go away, and he refused to.

He could’ve made his case by pointing to any past apology in print, but he didn’t. And now, because LGBTQ people asked for that, they’re the “haters.” Please.

Hart may not like the social media attention he’s received since becoming a big name comedian, but he can’t ignore it. Doing so only made his tempest in a teacup a full blown hurricane.