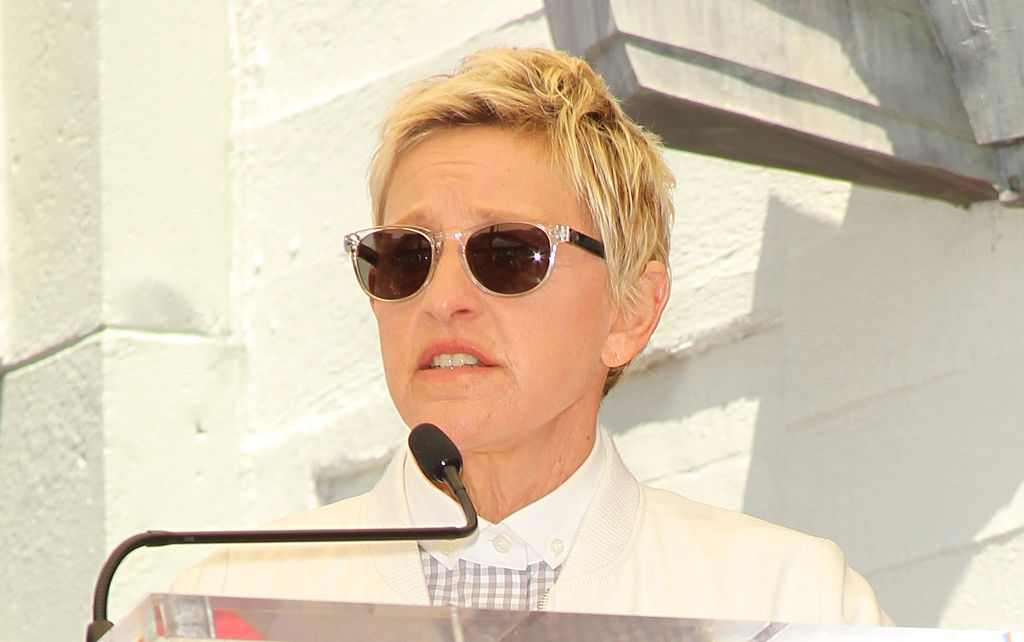 The canceled daytime talk show host is being pilloried by angry conservatives on social media who oppose mask mandates after she posted a picture of herself, wait for it, not wearing a mask at yesterday’s Super Bowl.

“Here we go,” Ellen tweeted at the start of the big game.

Former NFL star/GOP wannabe Jake Bequette, who is currently challenging Arkansas Senator John Boozman in the Republican primary for the 2022 election, was one of many who quickly pounced on the funny lady.

Bequette reshared the picture of Ellen next to a photo of a member of the Joint Armed Forces Color Guard who was wearing a mask before the game, along with the caption, “The absolute state of our country right now.”

The absolute state of our country right now. pic.twitter.com/xOyojrWlq9

Seriously, can we leave Ellen alone for just one second? We get that she’s problematic and that a lot of people really, really don’t like her, but let the woman be. At this point, she’s suffered enough.

Related: Ellen might be canceled, but let’s never forget all those times she kicked ass

Now, here’s what you should know about Bequette: Prior to running for office, the 32-year-old was drafted by the  New England Patriots in 2012. He played a total of three games in 2012 and five games in 2013 before being cut from the team in 2014. His campaign platform includes “[advancing] the Trump conservative agenda” and promoting “conservative values.” He loves guns, loathes immigrants, and thinks socialism is going to destroy the country.

Our corrupt media is not just giving credibility to an evil genocidal regime, they're spreading CCP propaganda with a smile.

The cowards who whine about our police and want to censor @joerogan are silent as we play games in genocidal China. pic.twitter.com/QSXGrn8qdd

And supports professional athletes who lie about their COVID-19 vaccination status:

God bless Aaron Rodgers and Novak Djokovic for refusing to back down.

Bequette also vehemently opposes vaccine and mask mandates, frequently railing against them on social media. That said, you’d think he would be in full support of Ellen taking a maskless selfie at the Super Bowl. Unfortunately, logic and reason are not the guy’s strong suit.

Now, here’s how people responded to his attack on Ellen…

Or maybe just maybe she took it off to take a picture 😮 orrrrrrr she was sitting in the cheap stadium section😵‍💫 AND wait, whoever she was with were fully vaccinated recently tested for COVID, negative and chose not to mask

Or she just took it off for the pic…

Had you done a little research you’d recognize entrance into the stadium required proof of vaccinations or a recent negative test… some, who have a compromised immune system, chose to wear masks…

You may have noticed that the color guard soldier was doing a rehearsal. They didn’t wear masks for the game.

I don’t understand your point…

Looked to me like most in the crowd were not wearing masks. Cherry picking

Per NFL guidelines, fans were required to comply with all L.A. County COVID-19 health and safety protocols to enter the Super Bowl LVI campus at SoFi Stadium. They also had to show proof of COVID-19 vaccination or a negative PCR test within 48 hours or  a negative antigen test within 24 hours of the game and adhere to a mandatory mask requirement inside the stadium at all times except when actively eating or drinking.