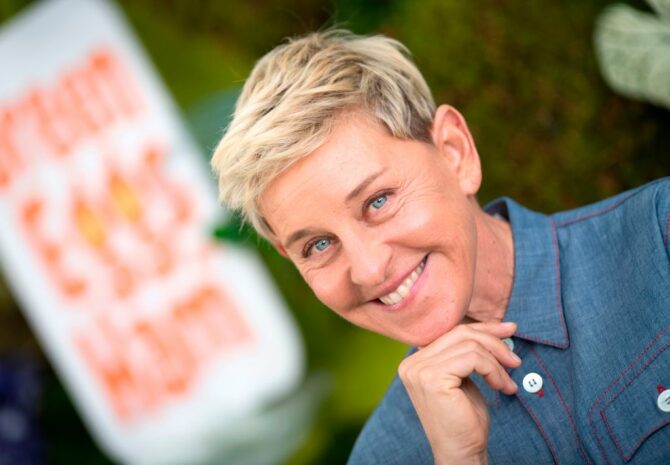 “In the beginning there was nothing. God said, ‘Let there be light!’ And there was light. There was still nothing. But you could see it a whole lot better.” — Ellen DeGeneres

As we reported last week, sagging ratings have compelled NBC to pull the plug on Ellen DeGeneres’ Game of Games competition show, effectively dismissing America’s favorite gal pal from the medium she ruled for nearly a quarter-century.

You could call it The Passion of Ellen–except for the uncomfortable fact that, according to many insiders, Ellen fired many of the arrows that mortally wounded her TV career all by herself. Of course, public personalities rarely dwell in a state of perpetual grace. Often, they prove all too human and fall victim to the same vices that ensnare the rest of us mere mortals.

Related: Ellen wanted to be a TV legend like Oprah but then “the truth came out,” former employees say

What you can say about Ellen that you can’t about most celebrities is that she singlehandedly moved the needle on LGBTQ acceptance, and risked her entire career in doing so. It’s only fitting that we put her achievements (to date) into perspective. And while she may have turned a blind eye or participated in the “toxic behavior” (it’s not quite clear) that led to the cancelation of The Ellen DeGeneres Show last year, the entire LGBTQ community owes her a debt in showing the world that gay people are people first–and that society’s fear of the unknown is just that.

Stop and consider what she attempted and accomplished. How many had gone before? How many chose a safer way out? How many stopped short of insisting that the world see and accept them just as they are? How many did this with a better sense of humor?

There’s no question that when she came out as lesbian back in 1997, she was pitched into a lions’ den of homophobes and skittish network execs who hoped to make an example of her and return the nation to a state of comfy oblivion about The Gays. That she triumphed over them is a testament to her tenacity as well as a cultural milestone suggesting America just might be ready to grow up–a little.

“The only thing that scares me more than space aliens is the idea that there aren’t any space aliens. We can’t be the best that creation has to offer. I pray we’re not all there is. If so, we’re in big trouble.” — Ellen DeGeneres

Here are Ellen’s top five moments in the public eye…

On April 14, 1997, Ellen found herself on the cover of TIME magazine, crouched behind a headline large enough to be read down the block: “Yep, I’m Gay.” There’s no walking that one back. This operation (and it was in gestation for nearly a year) was planned and executed with precision. Why? Because DeGeneres knew that once she opened this Pandora’s Box, its contents would be beyond her control. To guide the narrative as best she could took contemplation, strategic planning, worrying, second-guessing and courage beyond what many will ever know.

At this point, DeGeneres has hosted the Grammy Awards, the Primetime Emmys, and the Academy Awards. She’s written nearly half a dozen books and begun both a production company and a record company. She has won more People’s Choice Awards than any other person, and 30 Emmys. In 2016, President Barack Obama awarded her the Presidential Medal of Freedom, and the Golden Globes acknowledged her contributions in 2020 by presenting her with its Carol Burnett Award, which made her the first recipient since the award’s namesake.

“I’m on the patch right now. Where it releases small dosages of approval until I no longer crave it. And then I’m gonna rip it off.” – Ellen DeGeneres

Scarcely two weeks later, ABC aired “The Puppy Episode” of the sitcom Ellen, in which Ellen Morgan (DeGeneres’ alter-ego) comes out as attracted to women. Hours earlier, the real Ellen tiptoed into the subject, delicately explaining to an Oprah audience that she’s attracted “to the person.” Hours later, 40 million viewers across the country tuned in to hear Ellen tell her therapist (played by Winfrey) that she is indeed gay.

Like The Manhattan Project or Operation Overlord, the script bore its misleading title to throw off anyone who might suspect what was in store. Scripts were printed in red and black to make them more difficult to photocopy. At the end of the day’s shooting, dialogue for the day was turned in, accounted for, and shredded. And after the episode aired, DeGeneres was transformed into a national lightning rod for both praise and scorn. On at least one occasion, the production had to cope with a credible bomb threat. 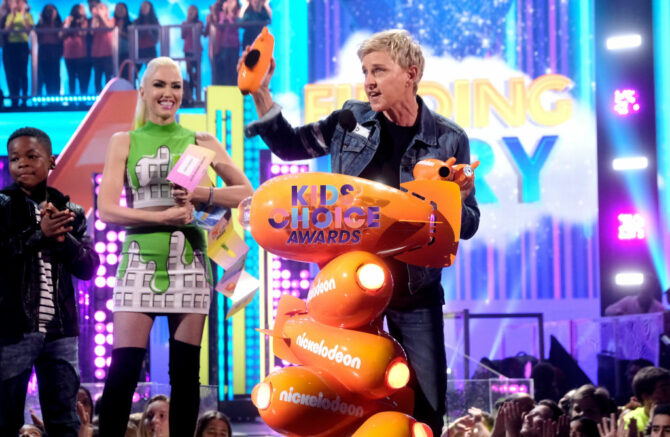 Canceled after only 13 episodes, The Ellen Show suggested DeGeneres’ days in the limelight might be quickly waning and that coming out might have just been a gimmick to attract attention. But, when director Andrew Stanton caught her on TV one day changing the subject five times before finishing a sentence, he knew he’d found a Dory to animate his Finding Nemo feature. DeGeneres won a voice-acting Saturn Award for her performance as the regal blue-tang fish with short-term memory loss, and she reprised her role in 2016 for the sequel, Finding Dory. The award had never been given to a woman before.

“If someone says you’re weird, say ‘Thank you.’” — Ellen DeGeneres 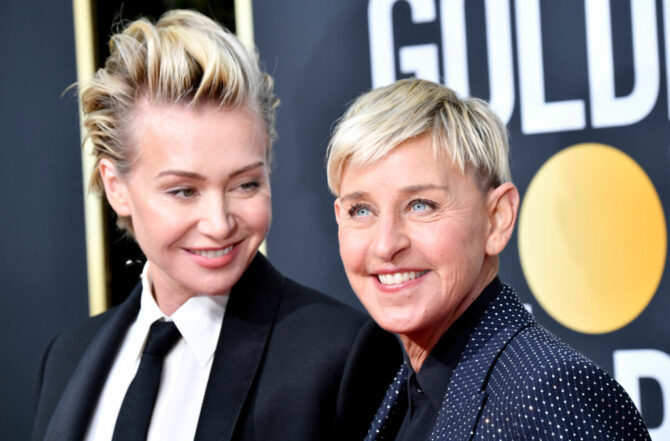 After high-profile courtships with actress Anne Heche and photographer Alexandra Hedison, Degeneres settled into a relationship with Portia de Rossi in 2004. The couple became engaged following California’s reversal of its same-sex marriage ban and they married in August 2008. Two years later de Rossi petitioned the court to legally change her name to Portia Lee James DeGeneres. The court granted her petition the following September.

“Find out who you are and be that person. That’s what your soul was put on this Earth to be. Find that truth, live that truth and everything else will come.” – Ellen DeGeneres 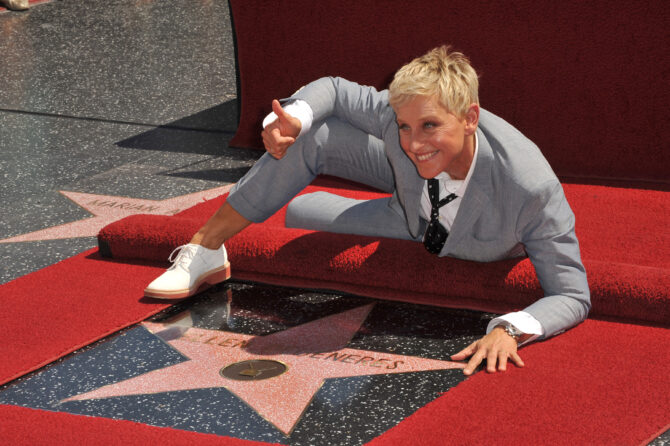 In 2003, DeGeneres seemed to find her niche with the debut of The Ellen Degeneres Show, a chat-fest renowned for its next-level cuteness, celebrity surprises and unabashed sentimentality. That veneer cracked wide open in July 2020 when Buzzfeed News ran a series of accusations claiming that DeGeneres presided over a “toxic workplace.” Former employees complained that they were let go after requesting bereavement days to deal with family deaths; they were fired for taking medical leave–and they were admonished not to speak to the star if they saw her walk by. One woman said the racial bigotry she endured became so unbearable that one day, she simply walked off the job.

Most of the unidentified ex-staffers (one source remained on the job while speaking anonymously) placed the blame on the show’s senior managers and executive producers. But they were quick to add that DeGeneres needed to “take more responsibility” for the show that bears her name.

Degeneres appeared when the show resumed taping in September. Contrite and tearful shortly thereafter and told The Hollywood Reporter that she had been “destroyed” by the revelations. The ratings for both shows never recovered. So… even the public may never know whether Ellen is a short-tempered control freak or that person she portrayed for nearly two decades on television — quick to laugh at her own expense, welcoming, always interested in someone else’s side of the story.

“Laugh as much as you can. Laugh until you cry. Cry until you laugh. Keep doing it even if people are passing you on the street saying, ‘I can’t tell if that person is laughing or crying, but either way they seem crazy, let’s walk faster.’ Emote. It’s okay. It shows you are thinking and feeling.” – Ellen DeGeneres 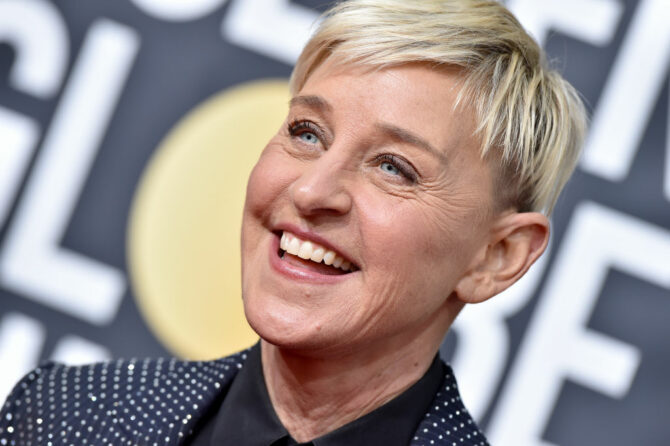 “My whole being is about making people happy,” she told the showbiz trade paper. “And with the talk show, all I cared about was spreading kindness and compassion, and everything I stand for was being attacked. So, it destroyed me, honestly. I’d be lying if I said it didn’t.”

While no one is ready to say that Ellen DeGeneres is done in show business or anywhere else, she takes the philosophical approach:

“Life is short. If you doubt me, ask a butterfly. Their average life span is five to 14 days.” — Ellen DeGeneres

Happy Birthday, Ellen! We look forward to your next act.