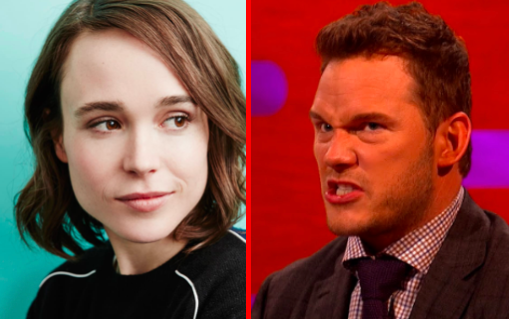 Chris Pratt’s comments last week about belonging to Hillsong Church prompted Ellen Page to call him out on Twitter for identifying with a church that is hostile towards the LGBTQ community.

On Friday, the out actress/activist took to Twitter to vent her frustrations after seeing Pratt talk about his homophobic church in an interview with Stephen Colbert.

Oh. K. Um. But his church is infamously anti lgbtq so maybe address that too? https://t.co/meg8m69FeF

Related: Chris Pratt attends an anti-gay church with a history of child molestation and ex-gay therapy

On Saturday, she fired off another tweet clearly aimed at Pratt but not calling him out directly.

This one went even more viral than the first, racking up nearly 200K likes, over 30K retweets, and 4K comments.

Pratt has yet to issue a response.

Besides fierce opposition to the LGBTQ community, Hillsong Church has faced other criticisms in the past. Founder Brian Houston is currently under investigation for his role in covering up sexual crimes committed by his father, Frank Houston.

In addition to the family woes, the church has come under fire for misappropriation of funds, abusive church leadership and connections to fraudulent faith healer Michael Guglielmucci.

Related: Chris Pratt isn’t the only celebrity at his ‘infamously anti-LGBTQ’ church