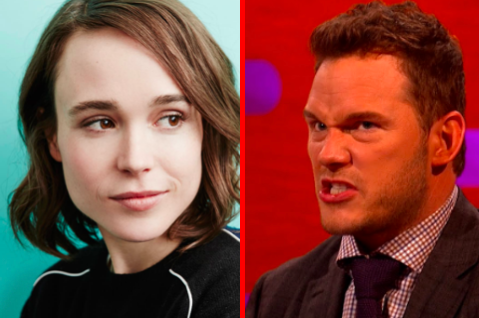 I’m not sure where I first read or heard that twist on the Biblical aphorism, or even if I agree with it completely. The person who initially dropped that line, however, made a solid point. Jesus saves, or so they tell me, but the world probably would be a more hospitable place — especially for the LGBTQ community — without organized religion.

Whether it’s the root of all evil or not, it was at the root of what is perhaps the most unexpected showdown of 2019 so far: Oscar-nominated actress Ellen Page vs. A-list action-movie hero Chris Pratt.

The 31-year-old Juno star made the first move by criticizing Pratt, 38, not for his choice of big-screen vehicles but for his taste when it comes to houses of the holy. The one where Pratt worships, Zoe Church in L.A., has ties to the Hillsong Church, whose L.A. congregation reportedly has welcomed such celebrities as Justin Bieber, Nick Jonas, and Kendall and Kylie Jenner.

Hillsong was founded in Australia by an anti-gay pastor who says he does not allow gay people to hold active positions of leadership in any of its branches, which actually sounds like a lot of churches everywhere. According to the Daily Beast, Hillsong also has supported gay conversion therapy.

“Oh. K. Um. But his church is infamously anti lgbtq so maybe address that too?” Page, who identifies as a lesbian, wrote on Twitter after Pratt talked about his old-time religion during a February 7 appearance on The Late Show with Stephen Colbert.

“If you are a famous actor and you belong to an organization that hates a certain group of people, don’t be surprised if someone simply wonders why it’s not addressed. Being anti LGBTQ is wrong, there aren’t two sides. The damage it causes is severe. Full stop.”

For several days, social media was in a state of heightened suspense as Pratt remained silent on the subject. Then this week, he finally responded via his Instagram stories.

“My faith is important to me but no church defines me or my life, and I am not a spokesman for any church or any group of people,” he wrote. “My values define who I am. We need less hate in this world, not more. I am a man who believes that everyone is entitled to love who they want free from the judgement of their fellow man.” 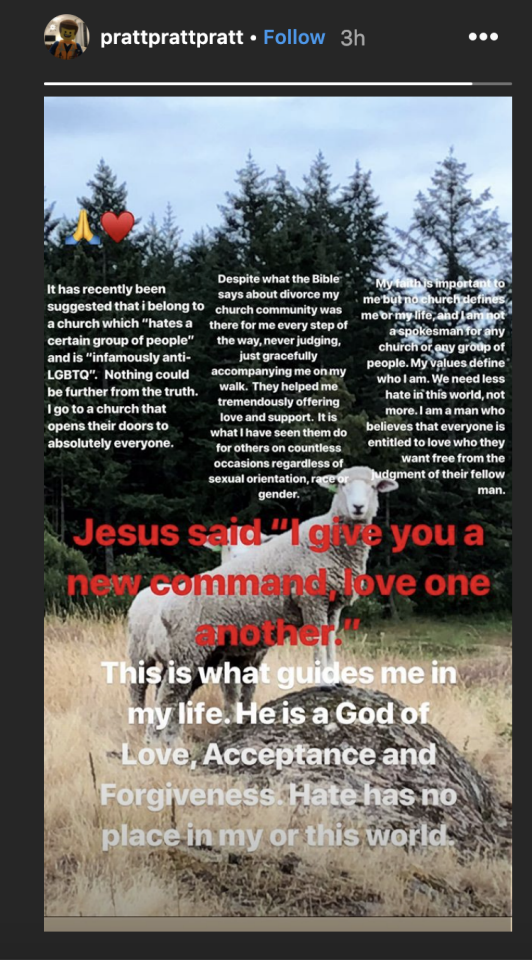 Hello, Hollywood (and, um, Kevin Hart). This is how you respond to criticism when you have no intention of backing down. Be firm but respectful. It also helps if you make some valid points, as Pratt did.

Page made some excellent points, too. I can’t argue with anything she said, and I can’t hate Pratt for how he chooses to spend his Sundays. That’s the trickiness with religion: You simply cannot manage the spirituality of others.

I learned this growing up in an ultra-religious family (denomination: Church of God) where every Sunday I had to brace myself for yet another fire-and-brimstone sermon. I still have nightmares over the movie The Burning Flames of Hell, which one of my childhood churches screened during a weekday evening service. Along with The Omen, that film set the stage (and made my bed) for the sleepless nights that continue to keep me up well into my middle age.

My pastors (a group that included two of my uncles on my father’s side) insisted that homosexuality was a sin, and if death wasn’t bad enough, sinners would have to sweat out their afterlife in a lake of fire. From the fourth-grade moment when my second crush, Ricky Sampson, started giving my first crush, Sandra Runyon, pretty, erm, stiff competition in the love triangle that was all in my mind, visions of those burning flames of hell kept me from admitting to myself — or to anyone else — that heterosexuality probably wasn’t going to be my future.

After I finally started coming out at 22, I had to endure the judgment of extended family. I had to stand through my brother’s wedding in which the paternal uncle who performed the ceremony condemned homosexuality from the pulpit (an obvious dig at the best man — me — and my other brother, who is also gay).

How dare we bring our boyfriends to such a sacred heterosexual event? How dare I embrace mine in the bathroom? The disapproval in my uncle’s eyes as he glared at Khleber and me and ignored my “Hello, uncle,” said everything he didn’t: Jesus loves you — unless you’re gay.

It’s a double standard that many Western religions uphold to some degree. So if you are a church-going person of faith, chances are you are surrounded by homophobes on a weekly basis. Should one stop going to church? Should one interrogate the entire congregation to make sure everyone is up with LGBTQ?

Despite my upbringing, I have rejected religion entirely as an adult and those family members who use it as a weapon against me. Still, I understand that some people need their faith in God to get them through the day because coffee alone doesn’t always do the trick. If we held everyone, not just Pratt, to Page’s standards, they all would have to find another crutch.

If we held everyone, not just Pratt, to Page’s standards, and we all were guilty by association with a homophobe, many of us would have to banish family members from our lives, quit our jobs, and boycott every business run by a God-fearing entrepreneur.

While I admire and applaud anyone who strives for a homophobe-free existence, I wouldn’t put that pressure on anyone, including myself. I could live in a world without religion, but I do not want to live in a world where I have to answer for anyone’s beliefs but my own.