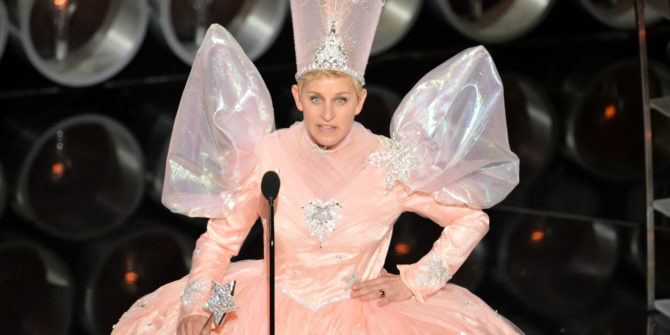 Ellen DeGeneres, of all people, knows coming out isn’t easy.

The actress/comedienne recently recalled her own coming out in 1997 and the media firestorm that ensued. In the midst of it all, DeGeneres endured death threats.

“When I came out, I had death threats and there was a bomb threat, but they misjudged the time of the taping,” DeGeneres told AdWeek in a new interview. “We had already finished, and thank God.”

Ellen came out during the fourth season of her eponymously titled sitcom, as did her on-screen character. The episode scored massive ratings, an Emmy, and likely condemned the show to cancellation one season later. “We’re living in a time now, the more controversial something is,” she explains, “the more popular it is. I just didn’t happen to have a show on at that time. The last season we did was a great season, and unfortunately nobody saw it because it was not advertised. It was purposely not advertised by ABC and Disney because they just wanted to hold their hands up to advertisers and say we’re not promoting it, we’re not doing this. And I get it. It’s a business, and I understand that. And so everybody had their reasons, and unfortunately I was just blindsided.”

The backlash to her own coming out caused major career setbacks. Still, today DeGeneres still refuses to back away from controversial issues. “I hope people understand it’s not even a political thing,” she says. “It’s just about what kind of character the person has. I demand if somebody is stepping over the line [for them to be] a decent, honest human being.”

“All I want to do is be the best person that I can be for me in my life, and that’s all I try to do. If it impacts people in a positive way, then I’m thrilled. I was somebody that, yes, turned into a brand, but the brand is positivity, the brand is love, which is why I have love on everything that I make. And it’s the time in our life when we need it more than ever.”