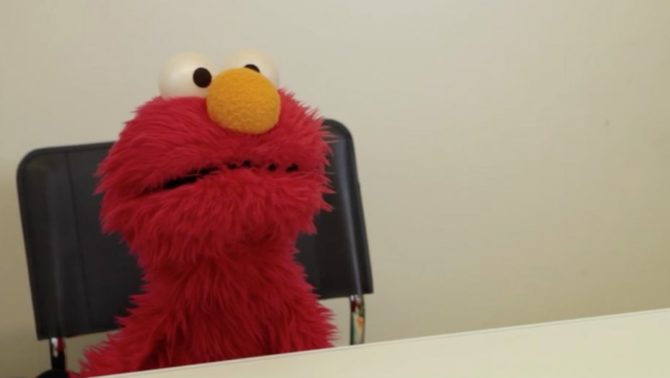 Just as George Orwell’s book 1984 accurately predicted would become of the world if someone like Donald Trump was ever put into a position of power, PBS is now offering a glimpse of what will happen if Trump follows through with his threats to gut the Corporation for Public Broadcasting.

Last fiscal year, CPB received $445 million in federal funding, which sounds like a lot but really isn’t when it comes to government spending. It ultimately costs each individual taxpayer about $1 per year, and would likely cost them even less if folks like Donald Trump and his fellow billionaire cabinet members paid their fair share in taxes. The money funds things like PBS, NPR, and other public media services, including Sesame Street. So, of course, Trump wants to take it all away.

But Sesame Street is fighting back. In an ominous new video, beloved Elmo sits in a nondescript room as an unseen man delivers the heartbreaking news that he is being laid off from his job on the world’s most famous street.

“Elmo, the Trump administration is getting all arts and education funding from the new Congressional budget,” the man says.

“Elmo’s been working at Sesame Street for 32 years,” he says. “Elmo hasn’t been unemployed since the ’80s!” Then he adds, sadly, “Elmo’s only real talent is being Elmo.”

The Internet doesn’t appear to be taking the news well either:

Me after watching that Elmo video https://t.co/a8ifSeSlLj

Watching @elmo get fired is the most depressing thing I've ever seen come out of @PBS
Also one of the most brilliant pic.twitter.com/H4gZwXVjeV

HES BEEN WORKING AT SESAME STREET FOR 32YEARS
HIS RENT WENT UP
HE HASNT BEEN UNEMPLOYED SINCE THE 80s
HOW ARE U GOING TO DO ELMO LIKE THAT pic.twitter.com/EU4gyxHAjl

@yashar Save and Keep ELMO and get rid of @POTUS – Elmo gives so much more to the world.

They really getting rid of Elmo, y'all dont understand. Elmo is a legend, I almost wanna cry. pic.twitter.com/gCzZUUQEMU

In a statement, Patricia Harrison, CEO of the Corporation for Public Broadcasting, said that Trump’s budget decision would result in “the collapse of the public media system.” She added that “there is no viable substitute for federal funding that ensures Americans have universal access to public media’s educational and informational programming and services.”