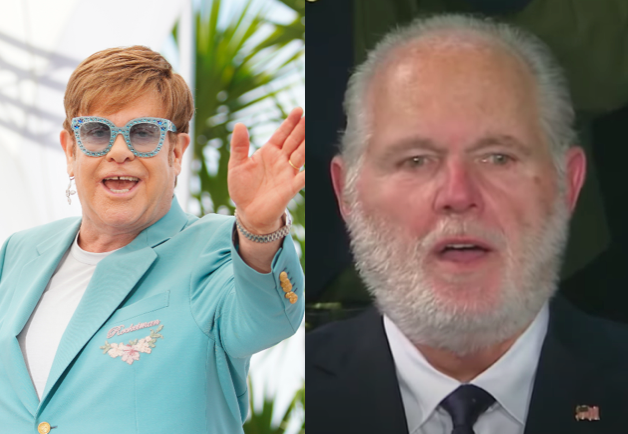 Conservative radio host and unapologetic homophobe Rush Limbaugh died yesterday after a battle with lung cancer. He was 70 years old.

Remember when Elton John preformed at Rush Limbaugh’s wedding and when asked why he did it he said it’s because he was paid a dump truck full of cash?

Reminder that Elton John slammed Russia over LGBT issues yet palled around with Rush Limbaugh, even performing at his wedding, this despite Limbaugh's mockery of AIDS victims and countless other obscenely racist and hate filled rhetoric.

To rich people, class solidarity matters more than anything else

Everyone saying Elton John is going to be upset “Funeral for a Friend” played at Trump’s farewell rally.

Not that I'm petty, but I've even refused to listen to Elton John since he played Rush Limbaugh's wedding.

Today I learned that Elton John performed at Rush Limbaugh's wedding in 2010, and, well, everybody truly does have a price.

In 2010, John was purportedly paid $1 million to play at Limbaugh’s wedding reception, when he married professional party planner Kathryn Rogers, his fourth and final wife.

The event was held at the luxurious Breakers hotel in Palm Beach, Florida and was attended by 400 guests, including well-known homophobes Karl Rove, Sean Hannity, Clarence Thomas, and Rudy Guiliani.

In addition to being treated to an 80-minute musical set, guests received a copy of John’s greatest hits album to take home as a souvenir.

At the time, The Guardian reported:

Even more unexpectedly, Sir Elton’s million-dollar fee may have been a reduced rate. Last year, Reuters reported that the Candle In the Wind singer is the “second most expensive” wedding performer, charging more than $2m (£1.38m) for private gigs. Proceeds from these concerts go to the Elton John AIDS Foundation.

Reduced rate or not, performing at Limbaugh’s wedding is an odd choice for the gay rights and AIDS activist. Limbaugh is one of the most maligned figures in American politics, loathed by the left, and has been accused of being both a homophobe and an AIDS denier.

John has only spoken a few times over the last decade about his friendship with Limbaugh. In 2012, he told USA Today that the radio host “sends me the loveliest emails.”

And in 2014, he told The New York Times, “When it comes to people like Rush Limbaugh, or people who might enrage you sometimes, dialogue is the only way. You have to reach out.”

Clearly, that “dialogue” didn’t work since Limbaugh remained a bigot and homophobe up until the day he died.

John has not issued any statement on Limbaugh’s passing.