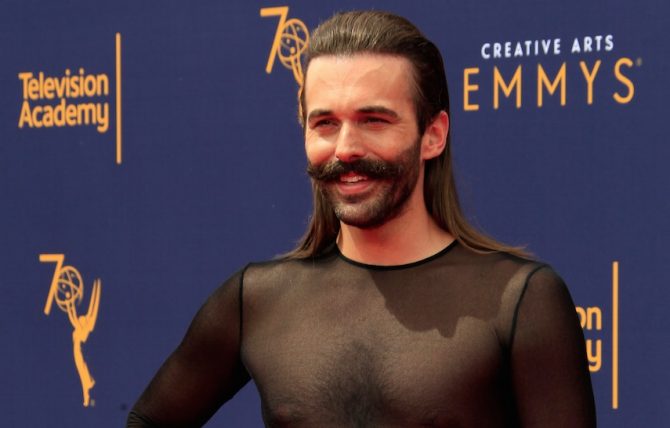 Jonathan Van Ness is nominated as an executive producer in the Primetime Emmy Award for Outstanding Short Form Variety Series category for the Funny or Die series Gay of Thrones, in which Van Ness and a celebrity guest star humorously recap the most recent episode of Game of Thrones. Guests on the final season of the series included Tiffany Haddish, Kumail Nanjiani, and Gabrielle Union. With lightning speed dialogue and clever pop culture references, the show itself is laugh-out-loud hilarious. But what’s more important about the series is that it showcases Van Ness as unapologetically himself: queer and femme.

Van Ness started his career as a hairstylist in Arizona before moving to Los Angeles to work in asalon. Gay of Thrones hit the Internet in 2013, and Van Ness started his own podcast, Getting Curious with Jonathan Van Ness,a few years later. However, it wasn’t until 2018 when he became part of the new Fab Five of Netflix’s Queer Eye reboot (which is nominated for six Emmys at this year’s awards show, including Outstanding Structured Reality Program) that Van Ness started to become a household name. On that show, he is responsible for transforming subjects’ hair, skin, and hygienic routines, and quickly became known for his sassy sensibility, quirky sense of style, and message of personal empowerment.

Van Ness has been open about the bullying he faced as a teen because of his sexual orientation and feminine gender expression, and how he found it difficult to find entertainment work in L.A. at first. Yet on Gay of Thrones, Van Ness is unmistakably femme in his speech, clothes, and mannerisms. This type of visibility for femininity is especially important for the gay community, as there still exists a strong current of femme-phobia (which is really disguised misogyny) and a privileging of masculinity above all else. As one of the executive producers and host of Gay of Thrones, Van Ness has taken control of his own narrative, and transformed what he used to be bullied for—his flamboyancy and femininity—into a successful and entertaining media product.

As one of the most popular shows of all time, Game of Thrones prompted prodigious amounts of online discussion after each episode. What made Van Ness’ take on the series unique was his ability to provide a queer perspective, as well as include a women-centered point of view from the many of the guest stars and production team on Gay of Thrones who are women. These underrepresented voices were given a chance to be heard on Van Ness’ show: to providean always comical, and sometimes critical, viewpoint on mainstream characters and storylines.

As a queer person, I find Van Ness’ brand of over-the-top extra to be particularly empowering. Whether it’s wearing nail polish to work or trying out a pair of high heels on the weekend, I’ve found myself more and more exploring my feminine side as a result of Van Ness’ example. He’s taught me that finding professional and personal fulfillment should not come at the price of sacrificing your own identity and self-expression, and that my happiness is, in fact, dependent on living authentically.

While he still uses he/him pronouns, Van Ness also recently came out as genderqueer and non-binary. In his interview with Out, he mentions that he felt restricted in his identity as a gay man, because “that’s just the label I thought I had to be.” A win for Van Ness would be a win for all queer, gender non-conforming, and femme-presenting people, who must deal with femme-phobia, misogyny, and binary imperialism from both the wider heteronormative society and from within the LGBTQ community itself. A win for Gay of Thrones would prove that being yourself is nothing to be ashamed of, and that no matter what you identify as, following your dreams and passions while being true to who you are is always the best success.

Donny MacDonell (@dmacdaddyy) is an Entertainment Research & Analysis Intern at GLAAD, and a master’s candidate in the Cinema and Media Studies program at UCLA. In addition to interning at GLAAD, Donny recently completed a programming internship at Outfest Los Angeles LGBTQ Film Festival.