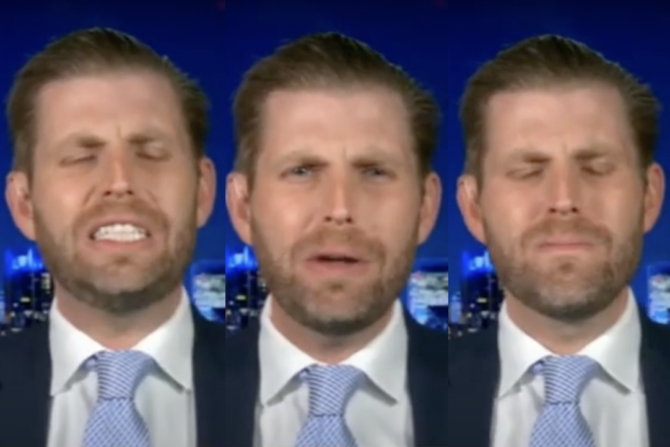 Eric Trump took a break from making macaroni art to go on Fox News last night, where he almost started crying while speaking to Sean Hannity about the recent allegations highlighted by Connecticut U.S. Attorney John Durham, the special counsel appointed under Donald Trump to investigate the FBI’s probing of Russian interference in the 2016 election.

On Friday, Durham alleged that a tech executive with ties to the Clinton campaign “exploited” access to White House data by peeking at internet traffic from Trump Tower and the White House in an effort to to find “derogatory” information about the ex-president.

He then went on to question why prosecutors weren’t looking into this, concluding that it’s obviously because his father is probably going to win back the presidency in 2024.

“Sean, where are the prosecutors right now? The same prosecutors that go after my father every single day for nothing, right? Just because he’s clearly the frontrunner for 2024!”

Becoming increasingly more unhinged, Eric then went on to accuse Hillary Clinton of “fraud” and “all sorts of offenses”. Then he blasted New York Attorney General Letitia James, who is currently investigating the Trump Organization for fraud, for not going after Clinton as well.

“Is she just going to ignore this because Hillary happens to be in her political party? Where is the equal justice?” Eric, appearing near tears, raged.

Wow. I shudder to think what Eric Trump sounded like BEFORE puberty. pic.twitter.com/O4zXDW2gYS

Eric’s emotional outburst came on the same day that Mazars USA, the accounting firm that has prepared annual financial statements for Donald Trump and the Trump Organization for years, announced it was cutting ties with the Trumps and that a decade’s worth of the reports “should no longer be relied upon.”

Eric Trump went on Fox News tonight to let us know how nervous he is.

As Trump Org gets dumped by Mazars

And he realizes it’s only a matter of time before the money runs out and Tish James comes a-calling!

That makes me very happy.

Can we get Eric Trump a fucking pacifier already?

Eric Trump deserves an Oscar for being able to fake tears and say that there's a "two-tier justice system" in America…but the victims aren't minorities, it's his family. Bravo.

It looks like Eric Trump has just come to the realization that his daddy is going to prison but Hillary Clinton isn’t. Even their accountant has jumped off the sinking ship!

what a joke
28 comments