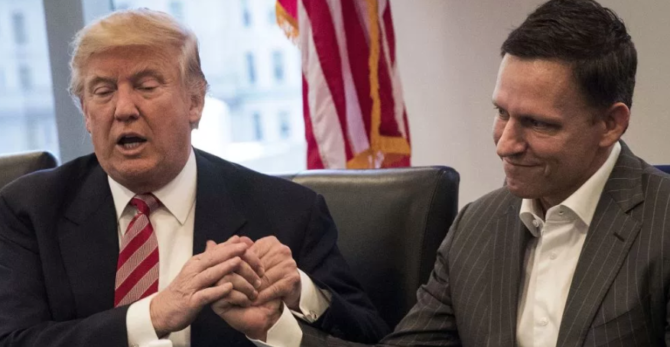 This is the arc of a love affair. First there’s the infatuation, when you can’t say enough good things about the object of your affection. Then there’s the period when you lavish gifts on your beloved. And don’t forget the hand-holding in public, just so you know how much the couple is in love.

But then the disillusionment sets in. You begin to talk about your disappointment privately. Can the break-up be for behind?

What makes this particular relationship drama so fascinating are the players: Peter Thiel and Donald Trump.

Related: Peter Thiel sold his soul to Trump and all he got was this embarrassing hand fondle

The Facebook billionaire placed a high-profile bet on Trump when everyone else was shunning him. While Thiel’s reasons for doing so were never entirely clear, as a contrarian who as spoken opnely about his distrust of democracy, his endorsement was in character. Plus the openly gay Thiel never really worried about all the 24-karat homophobes that surrounded Trump.

But a new article in Buzzfeed suggests that Thiel is disillusioned with Trump. The article cites anonymous friends and associates who say that on half a dozen occasions over the course of several months, Thiel derided the Trump administration as “incompetent” and said that “there’s a 50% chance that this whole thing ends in disaster.” As for his personal feelings, Thiel allegedly said that he was “annoyed” by how things were going.

That’s a pretty harsh assessment from someone who donated more than a million dollars to the Trump campaign, served on Trump’s transition team and reportedly had his choice of any Cabinet position–or perhaps even a Supreme Court appointment.

Publicly, Thiel continues to put on a happy face about the relationship. While he didn’t deny any of the quotes in the Buzzfeed article, he said, “I support President Trump in his ongoing fight” for change. Which, as love songs go, is pretty lame.

Related: Those crickets you hear? That’s Peter Thiel standing up to Trump’s attacks

Of course, as a Silicon Valley investor, Thiel is used to cutitng his losses. And he never had particularly high expectations of Trump anyway, telling The New York Times, “I always have very low expectations, so I’m rarely disappointed.”

The other half of the bromance may not be quite so philosophical. Trump demands loyalty above all else. Thiel’s comments are not going to set well with him.

The real question is why did Thiel ever think that someone with the impulse control of a toddler should be in charge of the nation. That may harken back to Thiel’s low regard for democracy, which he has said is incompatible with freedom. Perhaps Thiel thought Trump would blow the system up.

On that count, he has succeeded–though probably not the way Thiel hoped.