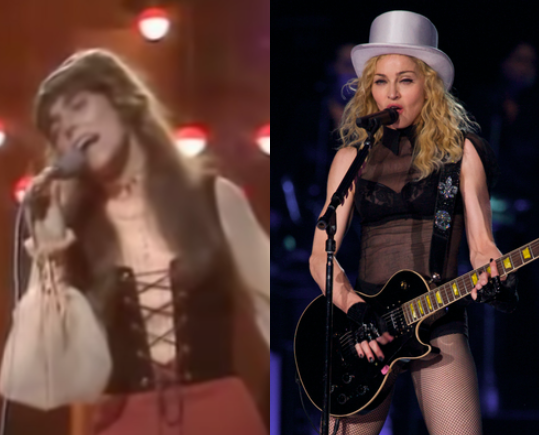 It all appears to have started when a user by the name of @BadBraRSR tweeted: “Karen Carpenter or Madonna? These are the two choices.. No ties… If you don’t like either, keep scrolling!”

Karen Carpenter or Madonna? These are the two choices.. No ties… If you don’t like either, keep scrolling!

Now, before we go any further, we would like to say that, regardless of what this guy says, it is entirely possible to like Karen Carpenter and Madonna equally. You don’t actually have to choose. Both are talented performers who have left their own unique marks in pop culture.

We’d also like to say that this is a weird comparison. Karen Carpenter was a ’70s soft rock singer who died from an eating disorder in 1983, the same year Madonna, a pop artist, released her first album of dance songs. The two weren’t even contemporaries. But whatever.

Now that that’s been said, let’s check out how people are responding…

Karen Carpenter and idk why this is even a question pic.twitter.com/mDcqSlilut

Madonna, but what a sick, Squid Game-level choice.

Clearly Madonna has the deeper catalogue of hits with over $300M sold but Karen Carpenter’s voice reigns supreme between the two.

I like them both, but if I have to choose, I’ll go with the healthier example to young girls that didn’t suffer from an eating disorder, and that would be Madonna.

Karen Carpenter this is no competition. pic.twitter.com/r2DI1dZWJB

You can’t compare Karen Carpenter to Madonna. Karen is a class by itself.

I know most people will probably say Madonna, but I choose Karen Carpenter. She had an amazing three octave contralto vocal range, and perfect pitch. And she was a really good drummer.

What does that have to do with the question?

This is completely unfair to Madonna. They both made music so based on voice Karen Carpenter had a beautiful pure voice while Madonna doesn’t. Madonna just knows how to entertain. I am willing to bet even Madonna would have to choose Karen.

But it doesn’t stop there. The conversation has gone beyond just the initial thread and it being tweeted about all over…

How the hell is Karen Carpenter vs. Madonna even a thing?

What kind of cursory relationship do you have with music to think this is an appropriate comparison to make…?! Anyway, Madonna. https://t.co/QBUMKqE2CH

Karen Carpenter, as a singer, had a better voice than Madonna. Not a slam against Madonna. Karen is regarded as having one if the best voices in pop history.

Karen Carpenter or Madonna? You can't pick they are both so different. Karen was super talented and tragic. When I hear her music I feel sad at a loss of what could've have been. Madonna is a cutting edge living legend.

Karen Carpenter or Madonna? I'm an 80s kid so….. pic.twitter.com/Nd9Vtmo4Lv

This is too apples/oranges but Esther has a deeper catalog so if we're talking music then it's her. Karen is the better singer/musician. https://t.co/h5CEd9pzLY

The Karen Carpenter/Madonna comparison is so random. It's like me saying, "Dogs or pizza, you've got to pick one." (It's dogs, obviously)