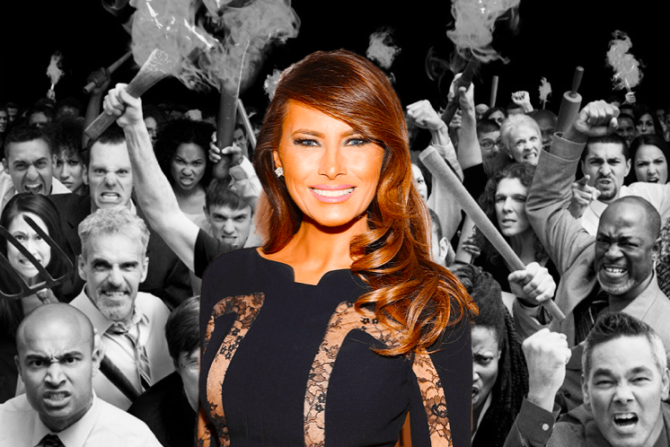 These are just a few of the emotions people across the country are feeling after news broke that first lady Melania Trump hadn’t bothered… or maybe she’d forgotten?… or maybe she felt too overwhelmed?… or tired? …to plan the White House’s annual Easter Egg Roll, a nearly 140-year-old American tradition.

Since 1878, the first lady has always hosted the spring celebration, which attracts upwards of 35,000 people, including local schoolchildren, military families, Congressional guests, and members of the general public.

This year, however, will be different. Apparently, Mrs. Trump failed the do any of the necessary planning, so the event is being scaled down bigly.

Instead of 37,000 attendees like last year, the White House is only expecting about 20,000. There won’t be any souvenir Easter eggs (the first lady missed the manufacturer’s deadline), nor will there be any costumed Seasame Street characters (the first lady didn’t get her request in to PBS Kids on time) or celebrity guests (nobody wants to attend).

Rumor has is, Donald Trump himself isn’t even planning on being there. (Apparently he has previous plans to go to Mar-a-Lago.) It’s also not totally clear if Melania will be there.

Naturally, folks aren’t happy about this. Sure, it may just be a silly Easter Egg Roll. But it’s a 138-year American tradition that has been honored by every administration since President Hayes!

Check out how people have been responding…

WTF does Melania do all day while Baron is in school? Can she & her staff not plan an Easter Egg Roll? Laziest bunch of ppl I've ever seen.

Glad #WH is doing an Easter Egg ROLL. If it was a HUNT, I bet they’d be as well-hidden as Trump’s taxes. Kids would never find a single one!

As far as I'm concerned, if you fuck up an Easter Egg Roll you are unfit to lead the country. #imissobama

Melania Trump is ditching the White House's annual easter egg roll. Imagine the outrage from the "right" if Michelle Obama did this…

Huh, it's almost as if the Trump White House is incapable of organizing, you know, anything at all. https://t.co/0a3BQeEjOa

Trump skipped White House Seder. Seems he will also skip the Easter Egg Roll. Baron is getting none of the perks. Poor kid.

2017: The same White House that couldn't figure out how to do the Easter Egg Roll is increasing tensions with a nuclear North Korea.

This is an administration that’s apparently struggling with the annual Easter egg roll. You can imagine what that means for trade policy

Can we sue Melania Trump for ruining Easter egg roll at the White House?

Breaking: Pence to make children pay for funerals for the eggs at the annual WH Easter Egg Roll stating "They're chickens, not choices."