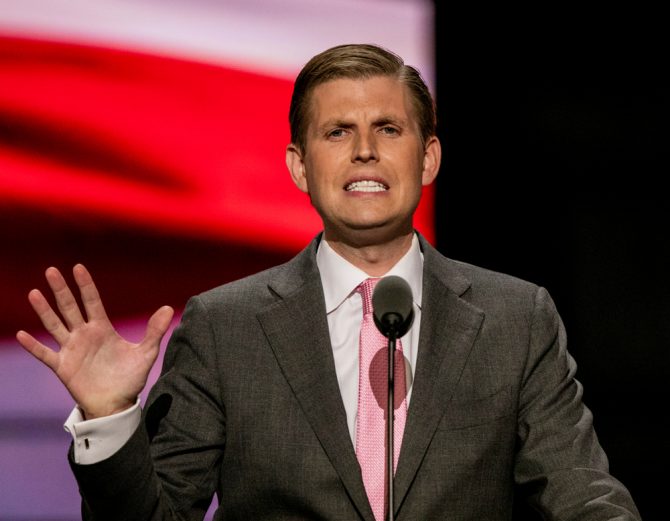 While campaigning for his father’s reelection, Eric Trump swung by Fox & Friends this morning to pander to LGBTQ voters and… come out? Wait… what?!

It all started when co-host Ainsley Earhardt asked, “There are a lot of people that might be voting for your dad that might be admitting it. So are you counting on this person? The ‘secret voter?'”

Eric Trump: "The LGBT community, they are incredible. And you should see how they come out in full force for my father every single day. I'm part of that community, and we love the man." pic.twitter.com/hl51ftW8l2

OK, OK, so maybe Eric didn’t come out exactly. He was sloppily quoting what supposed LGBTQ Trump supporters have allegedly told him on the campaign trail, but Twitter still had a field day with his official “coming out.”

Eric Trump: “The LGBT community, they are incredible. And you should see how they come out in full force for my father every single day. I’m part of that community, and we love the man.”

Does Eric Trump know that he just came out as LGBT? https://t.co/sXeKM9fr7m

Eric Trump: I’m part of the LGBT community, and we love my father.

Is Eric Trump announcing himself a member of the LGBT Community the “October surprise” Republican’s promised?

Eric Trump is a part of the LGBT community the same way Kevin Spacey is. Against our will.

In other Eric Trump news, a New York state judge recently ordered that he must submit testimony to investigators who are looking into the Trump family’s real estate transactions by October 7. Eric has been fighting a subpoena for his testimony since May.