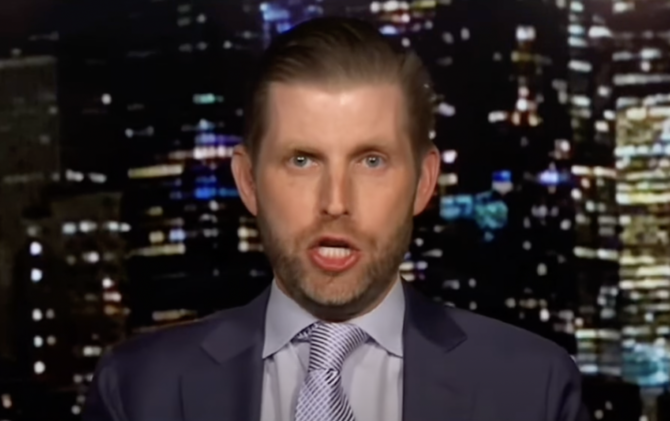 Eric Trump took to Twitter this week to issue a dramatic “fraud alert” to his 4 million followers. And just like that, irony was declared dead.

“Fraud Alert,” he wrote. “It has come to our attention that someone is promoting a crypto currency called ‘TrumpCoin’ (Symbol ‘TRUMP’). This has NOTHING to do with our family, we do not authorize the use and we are in no way affiliated with this group. Legal action will be taken.”

Fraud Alert: It has come to our attention that someone is promoting a crypto currency called "TrumpCoin" (Symbol  "TRUMP.") This has NOTHING to do with our family, we do not authorize the use and we are in no way affiliated with this group. Legal action will be taken.

But what Eric doesn’t seem to realize is that he’s about six years late to the party. The TrumpCoin token has been circulating on the crypto market since 2016. It was launched in honor of the man who would soon become the one term, twice-impeached 45th President of the United States. Creators billed it as “the #1 Patriot Cryptocurrency.”

The TrumpCoin Patriot loves Freedom, God, Family and feels a sense of pride in contributing to society. They stand up against corruption, support integrity, preserve our individual rights in a free society and respect those flags around the world that represent freedom. We stand firm against leftist groups and intimidation. Patriots have sacrificed their time, energies, careers, families and their lives for the good of all people.

Now, here’s how people have been responding to Eric’s “fraud alert”…

You lost me at “Fraud Alert.”

I believe you have other legal action to worry about first!

When you shorten it, it becomes almost like a haiku. pic.twitter.com/GlplFB9yYB

Can’t be a worse investment than anything “official” from your company.

You’re just mad you didn’t think of the scam first.

Why? There are other people that have the name and the word does have several meanings. Still time to flip, Eric!

“Fraud Alert” really this coming from a person that as part of a settlement had to take mandatory training on how not to misspend kids cancer charity funds.

Are you shaking your fist in the air while saying this?

Headline: Snake oil salesman upset that his likeness found on a bottle of snake oil… pic.twitter.com/iWJNSoNK4v

Translation –
“Why didn’t we think of that grift?”

You dont have to alert us. Most of us know to stay away from this brand

Now you know how the children dying from cancer feel.