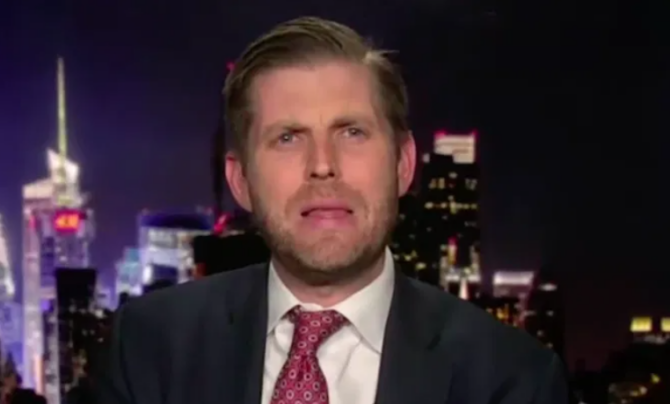 It turns out no one is more confused about the Trump family’s legal issues in New York more so than Eric Trump himself.

On Wednesday, the former president’s second son tweeted that his family had “filed suit in NY Supreme Court outlining the illegal & blatantly unethical behavior of Attorney General Letitia James. It is ‘third-world’ prosecutorial misconduct and her viciousness is truly embarrassing to the great state of New York.”

Today our family filed suit in NY Supreme Court outlining the illegal & blatantly unethical behavior of Attorney General Letitia James. It is “third-world” prosecutorial misconduct and her viciousness is truly embarrassing to the great state of New York. https://t.co/XaSF9QUREi

James’ has been leading an ongoing civil investigation into potential Trump Organization fraud, including whether the family business lied about the value of its real estate holdings for tax purposes.

True to his name, Eric’s tweet was heavy on indignation and light on facts.

As legal website Above The Law points out, Trump lawyers didn’t “file suit” in the New York Supreme Court. The family did file a motion to quash subpoenas for his father, brother, and sister, complaining James’ investigation is “a blatant and obvious attempt to suppress [Trump’s] voice, interfere with his political ambitions and silence the will of millions of voters – a violation of our nation’s most fundamental constitutional rights.”

Related: Eric Trump proves the body can successfully survive without a brain in Fox News appearance

In a response, James countered it’s tough to argue your speech is being suppressed when you won’t shut up.

Eric, who unsuccessfully quashed his own subpoena in James’ civil case, invoked his Fifth Amendment rights more than 500 times last month when questioned by the New York attorney general’s office for its investigation into the company’s finances.

Nobody knows third-rate better than Eric, but he might want to get out of the way and leave this to his lawyers.

Nope, he wasn't even right that they filed suit today. It was a brief in an existing suit.

Your family filed a motion in response, not a lawsuit. pic.twitter.com/plxlGIJaVO

Someone is freaking out and it isn’t AG James. https://t.co/5CmaGwt1zc

Because innocent people always file suits, plead the Fifth and refuse to just prove that you are…you know…innocent.https://t.co/nWp6JS31lP

How did you find an attorney desperate enough to work for your family?