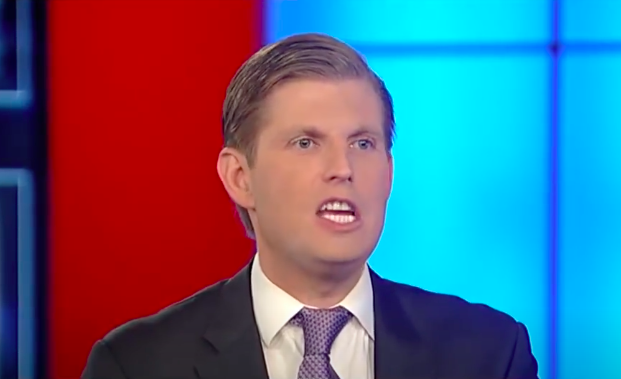 Eric Trump has once again lived up to his reputation for being a few watts short of a light bulb.

Last Saturday, the Senate voted 57 to 43 to convict ex-president Donald Trump of the one article of impeachment for incitement of insurrection. The historic vote fell just short of the two thirds needed for conviction, with only seven Republican senators voting with the Democrats, ten short of what was needed.

Still, it was the most bipartisan vote to convict an elected official in an impeachment trial in American history. On top of that, Trump also holds the unique distinction of being the only U.S. President to be impeached twice by the House of Representatives.

Now, most people would look at this as something to be ashamed of. Or, at the very least, not something to brag about. But not Eric Trump! Shortly after the majority of the Senate declared his father was, indeed, guilty, the 37-year-old took to Twitter to crow about his dad’s victory.

“2-0,” Eric tweeted, once again demonstrating that he has absolutely no idea how this whole impeachment thing works.

A majority of the Senate voted that your father GUILTY.

Imagine bragging about being the only twice-impeached President in history.

That’s what Eric is “proud” of!

Surprised you can count that high.

He’s still the only president in history impeached twice lol. Out of all impeachment’s of presidents, he owns half of them lol

As opposed to other presidents who actually served TWO terms and didn’t have even 1 impeachment… yep, the only president EVER to only serve 1 term and get impeached twice…wonderful record.

Gotta say that’s the strangest claim to fame of any President, but sure Eric your Dad only got impeached twice. 🙂 LOL

This is a weird flex bro

And yet, this still remains true: pic.twitter.com/auWLtEuopw

Of course, this is hardly the first (or second… or third… or fourth) time Eric has made a fool of himself on Twitter.

In December, he was widely ridiculed after he tweeted a meme “proving” his father won the election. And in November, he urged people in Minnesota to vote for his dad… one week after the polls had closed.