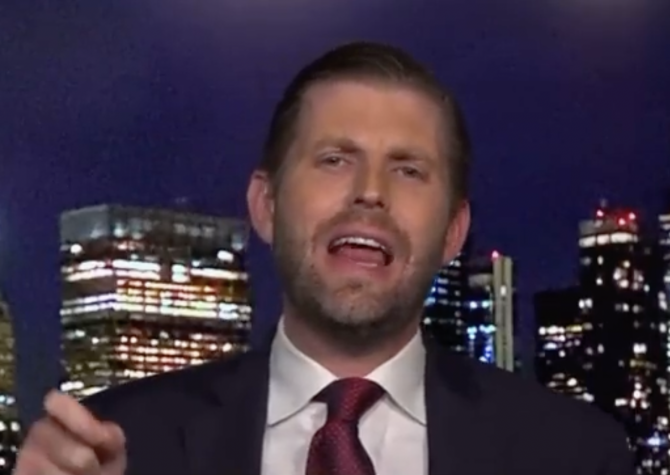 It wasn’t that long ago that Eric Trump‘s charity, the Eric Trump Foundation, was busted for funneling donations intended for St. Jude Children’s Research Hospital into his family’s golf courses instead. Now, he’s going on Fox News to once again share his concerns for children in America by bitching about their toys being stuck on container ships ahead of Christmas and blaming it all on Joe Biden.

“My father finally brought a sense of practicality and realism to politics that had never existed before,” Eric whined to Sean Hannity. “You compare that to Joe Biden who, while kids’ Christmas presents are sitting on ships outside the port of L.A. because they can’t get ships into the port of this country … he is over in Glasgow falling asleep at the climate summit. That has to tell you everything you need to know about a politician!”

OK, first, everyone CALM DOWN! Christmas is still a month and a half away. You have plenty of time to buy presents for your loved ones. And if you’re really that concerned, shop locally and none of this will be an issue.

Related: Eric Trump is sure acting like a guy who just figured out he’s in deep trouble

Second, Joe Biden resting his eyes during a United Nations climate change summit in Glasgow wasn’t a great look for the President, but it has absolutely nothing to do with global supply chain issues.

While this isn’t the dumbest thing Eric Trump has ever said, it might be among the Top 10. Let’s see how people have been responding…

So, Eric is concerned about kids not getting Xmas gifts, but was perfectly happy to steal from them if they had cancer. Got it.

Hey Eric, I heard Christmas was about glad tidings and peace on earth and good will to men. 🤷🏻‍♀️

Ships coming from where?
I thought we were supposed to “buy American”? 🤔

Someone should explain to Eric that if his father hadn’t bungled his handling of the pandemic we would probably be in a much different place. If he wants to blame someone he should look at Daddy.

HEADLINE: Man who steals from kids with cancer worries about kids getting Christmas presents late

I thought we were worshiping Jesus instead of gifts. Did I get that wrong?

Eric Trump is worried about kids Christmas presents being stuck on ships, because if their on container ships he can't steal them.

Parents everywhere will be thanking him for those “difficult conversations” over the next few days.

Someone thought it would be super informative to ask Eric Trump how he feels about Christmas. 🤣