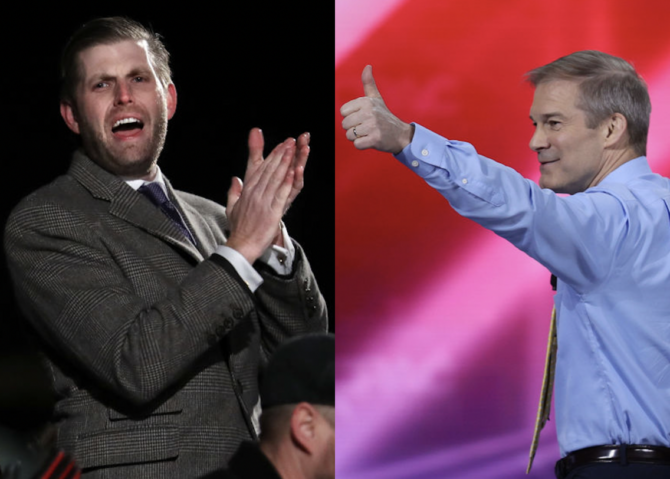 Eric Trump is trending this morning because of something Jim Jordan tweeted last night, so you know something very stupid must have happened… And it did! It sure did!

Yesterday evening, Jordan tweeted: “Eric Trump: ‘If I did 1/100 of what Hunter Biden did, I’d be in jail.’ He’s not wrong. Americans have had it with the double standard.”

Americans have had it with the double standard.

Jordan, who recently won Donald Trump‘s endorsement in his bid for re-election, was quoting an interview Eric gave earlier this week to NDT’s “Capitol Report” about Hunter Biden’s laptop. (Yawn.)

Then came the kicker.

cool story bro, remember when Hunter Biden was ordered by a court to take a class in “how not to steal money from a charity” after getting caught doing exactly that? oh wait, that wasn’t Hunter Biden, that was Ivanka, Individual-1 Junior and Eric Trump

Lol. Can anyone actually explain what Hunter supposedly did? Other than owning a laptop? Which isn’t a crime?

Eric Trump invoked his Fifth Amendment rights more than 500 times during depositions with the New York AG’s office, Gym.
And his foundation told it’s donors that their money went to kids with cancer, only to then give that money to other trump friendly causes.

So have a seat.

Was he talking about the amount of cocaine he does on a daily basis?

Just look the other way, Jim, you know, like you did in the locker room at OSU.

Hunter hasn’t been charged with anything. Eric was charged and found guilty of stealing money from a children’s cancer charity.

Who else wants to hear Jim Jordan testify about his 10 minute phone call with Donald Trump during the deadly insurrection?🤚🤚🤚

Do you miss the locker room showers, Gym? pic.twitter.com/eF3Jq1taXC

Last week, Jordan told reporters that if Republicans take back the House in the 2022 midterm elections, they might consider impeaching President Biden, though he couldn’t actually say what the president did that would merit impeachment, only that it was “definitely a discussion we have to have.”