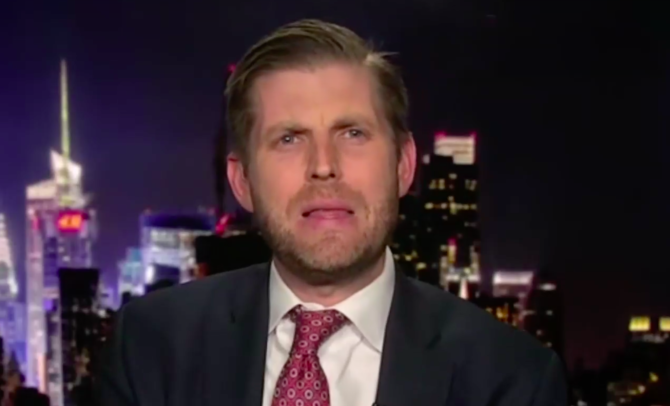 Well, it’s not a great day if your name is Eric Frederick Trump and you’re the son of ex-president Donald Trump.

According to Forbes, Eric’s attorney who’s been representing him in New York State’s civil fraud suit against the Trump family business just up and quit and it’s not clear why.

Marc Mukasey of Mukasey Frenchman LLP informed a New York state Supreme Court judge in Manhattan last week that he was withdrawing from the case effective immediately and will no longer be representing Eric in any capacity.

The Trump Organization is currently being investigated by New York Attorney General Letitia James over allegations that it lied about the value of its assets to secure better loans and bigger tax breaks. Eric has denied any wrongdoing and accused James of “prosecutorial misconduct” and of trying to score “political points.”

Without any basis, the NYAG has pledged to take my father down from the moment she ran for office. This is the highest level of prosecutorial misconduct – purposely dropped on the eve of the Republican Convention for political points. Sad that this is her focus as New York burns pic.twitter.com/5tgtS3vH3F

In addition to the civil suit, the Trump Organization and its longtime CFO Allen Weisselberg are also facing criminal fraud charges for allegedly handing out non-monetary benefits to top officials, including things like luxury cars, private school tuition, and free housing in Trump properties, without paying any taxes on the value of those benefits.

When approached for comment, Mukasey, who has represented Eric since the case was first filed in August 2020, declined to say why he had abruptly quit. Eric is now being represented by criminal defense attorney Alan Futerfas.