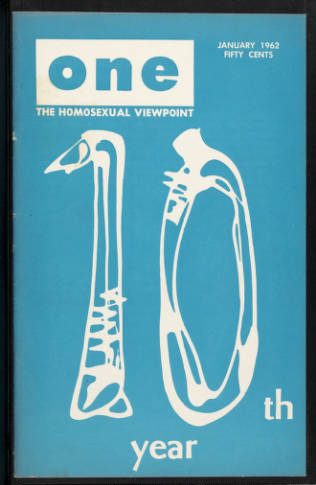 This is the sixth in our series of ONE magazine cover stories.

To mark ONE’s tenth anniversary, Betty Purdue (writing under the pseudonym of Geraldine Jackson) hearkened back to the first issue of the magazine, in which she wrote of her “crossing from the heterosexual world into the homosexual one—by choice.” A decade later, Purdue urged her fellow queers to step out of the shadows and into community, not just for their own sake but for the greater good:

In every other minority group I can name, the individuals stand together for common protection. Not so the homosexual minority. We have no internal unity. No sense of belonging to a group from which we both give and receive loyalty. … Instead, like a lost child, the average homosexual seems to look, not to his own group, and certainly never to himself for his protection and security, but always to the heterosexual.

IF ONLY THE HETEROSEXUAL UNDERSTOOD US, he bleats, ALL WOULD BE WELL. But deep within his heart he knows that this is simply not true. Acceptance comes from within, not without.

Purdue went on to argue that gay people were little different than non-gay people, and therefore shouldn’t make a big deal out of it.

We are different, not only from heterosexuals in general, but even from other minority groups in particular. In other minority groups, at least, their right to existence is acknowledged. Not so the homosexual minority. We—so far as the average public is concerned—should not exist at all.

The antidote, she wrote, is something akin to Homosexuals Anonymous—not because gays were “sick” but because of the communal resources and mutual support available in such a setting. In essence, she was arguing for a prototypical LGBTQ Community Center, and for her readers to stop imagining themselves alone and begin to see the bigger picture.

All we can say to that is preach.\, Ms. Purdue.