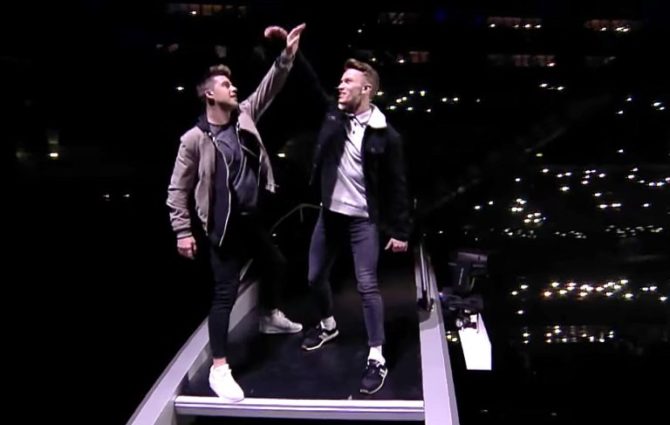 Eurovision contestant and singer-songwriter Ryan O’Shaughnessy of Ireland has been melting hearts since releasing his single “Together” earlier this year.

At first listen, the single sounds like just another love song. But it’s the music video that has everyone swooning. It features an adorable gay couple frolicking down the street after leaving Dublin’s Temple Bar.

Shortly after the video’s release in March, the song was labeled a “gay anthem” and became an international hit.

During last night’s Eurovision broadcast, 25-year-old O’Shaughnessy, who describes himself as a “versatile singer”, performed “Together” in the semi-finals, much to the crowds delight.

Halfway through the song, dancers Kevin O’Dwyer and Alan McGrath recreated their dance from the now iconic video, causing quite a stir in the audience when they first appeared on the set.

The performance was a huge hit and sent Ireland into the finals.

Of course, a lot of people were very excited about the advancement. But perhaps no one on the planet was as excited as this dude, who had a total meltdown when it was announced Ireland would be advancing:

THIS MAN NEARLY HAS A HEART ATTACK WHEN IRELAND GETS THROUGH TO THE EUROVISION FINAL! ???? Video Credit: RTÉ's Derek Mooney! pic.twitter.com/eIeVLKXXF3

26 countries will participate in the Eurovision finals, which will be held in Lisbon next week.