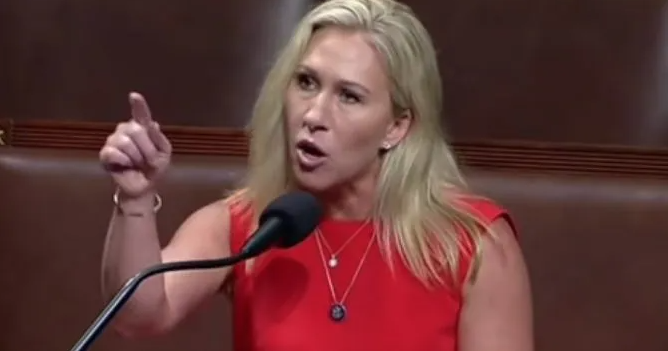 A Texas member of the House of Representatives has officially had it with his fellow Republican colleague, Georgia Representative Marjorie Taylor Greene.

“So what the federal government should be doing, again, is using their FEMA resources to bolster a lot of these testing sites, open up new testing sites,” the former Navy SEAL said on Fox News.

Greene, whose personal Twitter account was permanently suspended “for repeated violations of our COVID-19 misinformation policy,” and who shortly after proclaimed “Big Tech can’t stop the truth,” took to Instagram to spread more nonsense.

FEMA shouldn’t be setting up sites for “sneezes, coughs, and runny noses,” she wrote, before accusing Crenshaw of harming the conservative brand. Funny, we thought that was her thing.

“No FEMA should not set up testing sites to check for Omicron sneezes, coughs, and runny noses. And we don’t need FEMA in hospitals, they should hire back all the unvaccinated HCW they fired. He needs to stop calling himself conservative, he’s hurting our brand.”

Crenshaw responded on his Instagram story, writing, “Hey, Marjorie, if suggesting we should follow Trump [SIC] policy instead of Biden mandates makes you mad, then you might be a Democrat — or just an idiot.” 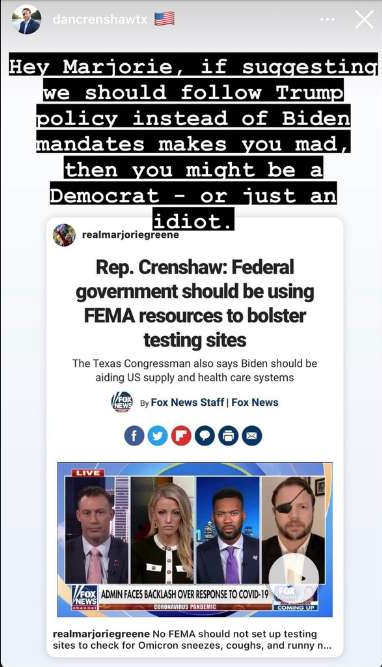 While Crenshaw may be right in calling out his extreme colleague, he’s hardly a political role model. The “religious freedom” fighter opposes transgender rights, and he’s posted his share of crazy to social media, too.

In 2020, he posted a movie trailer-style campaign ad titled “Georgia Reloaded” in which he beats up ANTIFA members.

“She’s your and the GOP’s idiot, who votes almost in tandem with you- own it Rep. Dan Crenshaw,” observed one commenter.