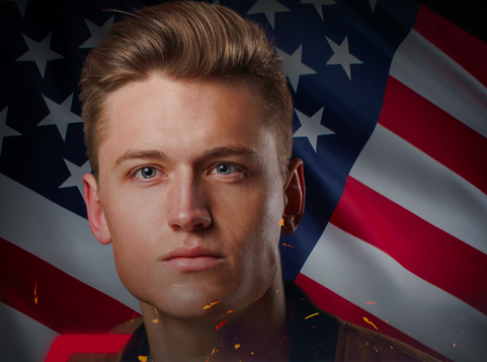 Gunnar Thorderson. Ever heard of him? Yeah, us neither. Until today, unfortunately.

Now, we know what you’re probably thinking. “That’s the name of newest Sean Cody model, right?” The answer, however, is no.

Believe it or not, Gunnar Thorderson is an ambassador for the antigay hate group Turning Point USA. He’s lives in Utah with his wife and kids and loves posting weird amateur modeling pics of himself pretending to be a politician (along with the occasional thirst trap) to Instagram, where he has approximately 50,000 followers…

Recently, Gunnar landed the gig of a lifetime when he was tapped to host the show “Firefight” on a new Gen Z Republican streaming platform called “Today Is America.” The platform recently announced a lineup of young conservatives you’ve probably never heard of who will host their own shows that are set to premiere sometime in the future.

Gen Z Republicans have their own streaming service now. pic.twitter.com/qYsBsqymFA

Among the lineup of hosts is some blond chick named Kaylee Campbell, a brown-haired woman who goes by simply “Morgonn” (two Ns, no last name), a basic white dude named Blake Kresses, and a douchey-looking duo named Lance Johnson and Dom Fernando.

Then, of course, there’s Gunnar.

Of all of these shows, this one seems the most real. Hosted by Gunnar Thorderson, it has to be a show where he just yells about how immigrants are ruining this country, how much he loves his wife, and refusing to vaccinate his children. The title Firefight pulls off one of the oldest tricks in the book, in which a repugnant conservative takes something cool sounding and makes it godawful (see also: Grand Wizard).

Gunnar Thorderson? sorry but no way

Refuse to believe Gunnar Thorderson is a real name

Gunnar Thorderson is awesome. What a name. I can only assume the rest of him lives up to it.

No word yet on when “Firefight” will premiere.

baring it all
7 comments