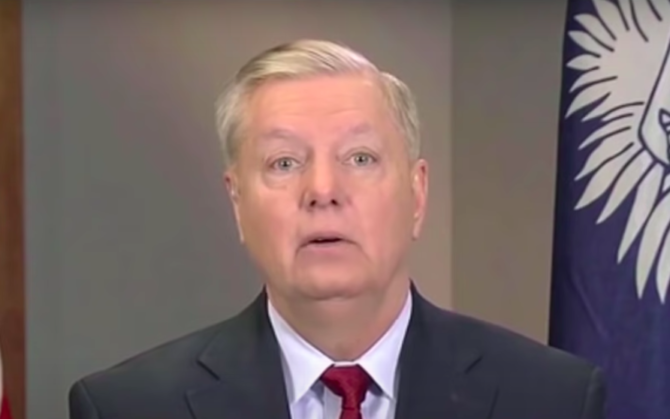 Lindsey Graham went on Fox News yesterday to brag about how he owns an AR-15, the same style of weapon used in the Pulse Nightclub massacre, Sandy Hook and Parkland school killings, and countless other attacks on innocent civilians.

“I own an AR-15,” Graham told Chris Wallace during a discussion about last week’s shooting at a supermarket in Colorado.” If there’s a natural disaster in South Carolina where the cops can’t protect my neighborhood, my house will be the last one that the gang will come to because I can defend myself.”

Got that, folx? If there’s ever a natural disaster in South Carolina, don’t even think about going over to Lindsey’s house because he’ll shoot you dead with the AR-15 in his bedroom closet.

“I own an AR-15. If there’s a natural disaster in South Carolina where the cops can’t protect my neighborhood, my house will be the last one that the gang will come to, because I can defend myself.” — Lindsey Graham pic.twitter.com/PYTkLzvK1J

Remember, this is the same guy who “screamed” during the Capitol riots and accused a police officer of not doing “enough” to protect him while he was cowering in a safe room, according to Sen. Sherrod Brown.

The antigay senator went on to say that “you don’t have to have a AR-15, but if you have one lawfully, I think you should be allowed to keep it.” Then he blamed “mental health” for mass shootings.

“The suggestion that a twerp like Lindsey Graham could be some sort of tough guy fending away apocalyptic invaders is just the narrative they sell,” Kasky said. “It’s what the gun lobby wants Republicans to say in order to sell more guns.”

Graham is also being dragged on Twitter for his comments. Here’s what people are saying…

A terrified Lindsey Graham running around with an AR-15 is a good reason to restrict gun sales.

Lindsey Graham says he owns an AR-15 to protect himself from “gangs”….

What the fuck is he talking about?? 😂

If Lindsey Graham ever encounters a gang he’s fucked whether he owns an AR-15 or not.

Who else seriously doubts that Lindsey Graham has ever so much as laid his hands on an AR-15?

Lindsey Graham keeps an AR-15 in his tree just in case roaming gangs of snacky marauders try to eat his cookies. pic.twitter.com/mIiDLdtaxs

Lindsey Graham has an AR-15 because of gangs. You know, all those gangs in his neighborhood who are after him since he switched from Bloods to Crips🙄.

Don’t worry, South Carolina, if a hurricane comes, Lindsey Graham will kill it to death with his AR-15.

Lindsey Graham says he has an AR-15 because of gangs. I thought the Proud Boys, Oath Keepers and 3%ers were on his side.

I don’t believe for one second that Lindsey Graham could succesfully fire an AR-15, let alone hit his target.

What I see when I try to imagine Lindsey Graham holding his AR-15. pic.twitter.com/oNJt73t8RR