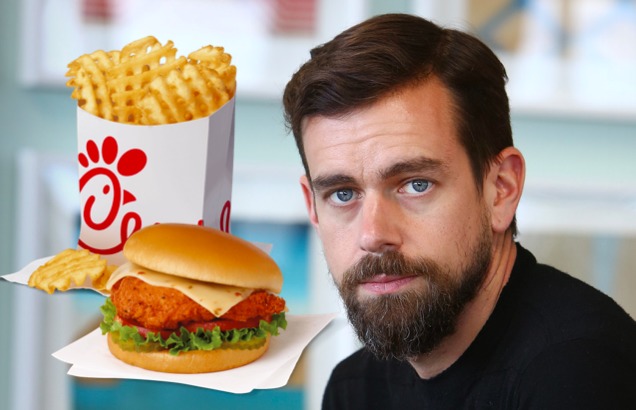 Twitter CEO Jack Dorsey caused quite a controversy the other day when he stopped into a fast food joint for a quick bite to eat.

It all started when Dorsey tweeted about using his new Cash app to pay for his meal at Chick-fil-A.

It was the kind of self-promotional tweet that could very easily be ignored. After all, who really cares what the hell Jack Dorsey eats for lunch and how he pays for it?

There was just one teensy tiny problem. It’s Pride Month and Chick-fil-A’s CEO is a raging homophobe who opposes same-sex marriage.

People were quick to point this out.

This is an interesting company to boost during Pride month, @jack https://t.co/Wmhq6Obrp1

You must love the taste of bigotry!

On behalf of the whole LGBTQ community, Jack, kindly boost your head out of your ass.

Dorsey eventually caved to pressure and apologized for lunching at Chick-fil-A, writing: “You’re right. Completely forgot about their background.”

However, he didn’t delete the tweet. So it’s still up on his Twitter page for his 4.2 million followers to see.

Jack, if you’re reading… Next time, enjoy your greasy chicken sandwich in private. Oh, and maybe delete that tweet?