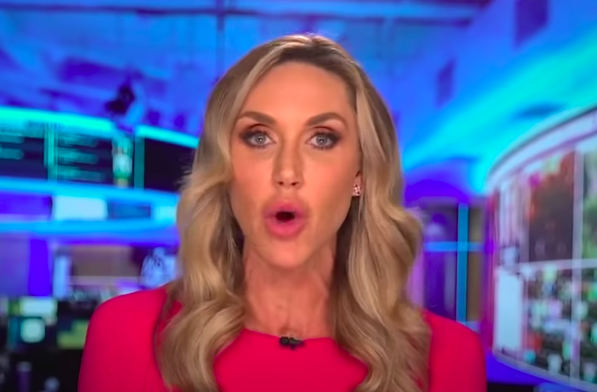 Lara Trump has been trending on Twitter all morning for not one but two ridiculous things she said on Fox News both yesterday and today.

Lara went on Fox & Friends to discuss rumors circulating among the QAnon crowd that her father-in-law will be “reinstated” as President of the United States come Labor Day.

While the origin of the August-reinstatement theory remains unclear — it certainly did not come from constitutional-law scholarship — the first mention of it to gain significant traction came from Mike Lindell, the founder and CEO of MyPillow and a staunch Trump ally.

When asked about the rumors, Lara played it coy when she said, “As far as I know, there are no plans for Donald Trump to be in the White House in August. ”

Then she added, ominously, “Maybe there’s something I don’t know.”

Clearly, she was trying to pander to QAnon believers while simultaneously looking like she was squashing the reports. It’s the same abusive psychological strategy Donald Trump employs every time he repeats something “many people” believe then says, “I don’t know if it’s true. You tell me.”

"As far as I know, there are no plans for Donald Trump to be in the White House in August. Maybe there's something I don't know" — Lara Trump pic.twitter.com/7AUI8HfsmP

Then last night, Lara appeared on Sean Hannity’s show to applaud her father-in-law for single-handedly ending the coronavirus pandemic. (Which is still not over BTW.)

Then came the kicker.

“You go in places like Target. I went to Target earlier today. A lot of people without masks in Target because people are getting vaccinated. We are coming out of this thanks to President Donald Trump!”

Lara Trump thanks former President Trump for people walking around without masks in Target pic.twitter.com/As4fFfxQtH

But it wasn’t Lara’s outrageous insinuation that it’s Donald Trump and not, say, scientists or doctors or frontline workers, who is the responsible for getting us through the pandemic that has people rolling their eyes. It was her totally unbelievable claim that she shops at Target absolutely nobody’s buying.

Lara Trump’s ass has never been in a Target. pic.twitter.com/XVjKrcWm9X

Lara Trump has never been in a Target, and had to ask someone how to pronounce it for this interview.

Lara Trump gaslighting that she’s actually been in a Target.

What a load of bullshit!

Close, but no cigar… pic.twitter.com/PqVxwFjb0O

You can’t trust Lara Trump, she married Eric Trump on her own volition. ???

Hell, I don’t even shop at Target. No way Lara Trump shops at Target!

Lara trump is all over Faux News giving the failed mass murdering twice-impeached former guy credit for the vaccine & thanking him for people going around maskless in Target. Because she is garbage. Why does anyone want to listen to someone who's dumb enough to marry Eric trump? pic.twitter.com/K5KmP0bXq4

I went to Target yesterday. Half of us were wearing masks. I’m vaccinated and I just couldn’t remove mask. Also, I didn’t see Lara Trump there or any other American traitors.

Why is anyone listening to anything Lara Trump has to say?

And the beat goes on…and on…and on… pic.twitter.com/kZUBPe7dNV

How much do you wanna bet that sometime in the next 24 to 48 hours, Lara is going to post a photo of herself shopping at Target to Instagram?

P.S. While we’re on the subject of Target, check out its kickass Pride Collection. Happy Pride, y’all!