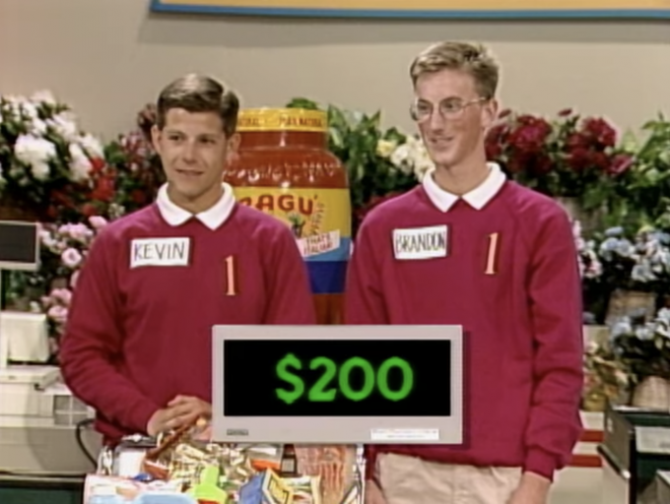 As people continue to hunker down at home, they’ve been consuming more television than ever. A lot of them have been getting into the hit ’90s game show Supermarket Sweep, which recently became available on Netflix.

The game show originally aired from 1990-1995 and featured contestants racing up and down the aisles of a suburban grocery story grabbing as many items as possible in hopes of winning $5,000.

One of the episodes features Brandon and Kevin, a pair of well-groomed, attractive, 21-year-old college students. When host David Ruprecht asks Brandon how he knows Kevin, Brandon replies, “Kevin is my roommate from Santa Barbara.”

While that might have worked in the early 90s, audiences in 2020 aren’t buying it.

So #SupermarketSweep is now on Netflix and this one team absolutely crushed it. Kevin and Brandon are roommates at UCSB, but in my heart, they’re much more. And THAT’s what my quarantine has come to. pic.twitter.com/gztxlhTKj4

So I’m watching old eps of supermarket sweep on Netflix and no judgement but I think Brandon and Kevin are more than “roommates”.

Kevin nailed the questions. And later that night, I hope he nailed Brandon!

Kevin and Brandon from Supermarket Sweep are gay right? pic.twitter.com/lTu9c23JIn

would i die for kevin and brandon on season 1, episode 4 of 1990’s smash hit reality competition show, supermarket sweep? science is pointing to “yes” pic.twitter.com/RyiHxbzpPR

I love that the college boys Kevin and Brandon are just out here absolutely annihilating these moms and grandmas on Supermarket Sweep pic.twitter.com/g3y0ybkLLA

This week, Kevin Fallon, a senior entertainment reporter at The Daily Beast, did the world a favor. He tracked down Brandon and Kevin to see what they’re up to today. Are they gay? Were they boyfriends? And, if so, are they still together?

Neither Brandon, who lives in Santa Clarita, Calif., nor Kevin, who lives in Austin, Tex., are on social media, and have been relying on friends and family to keep them posted on their new viral fame.

Kevin occasionally succumbs to curiosity and searches #SupermarketSweep on Twitter, where he discovered the swath of tweets saying, as he puts it, “Roommates? Hahaha…” Brandon hadn’t know that part of their viral fame was owed to the presumption that they were a closeted couple, and people’s hopes that they were still together all these years later.

Both find it very funny, and both clarify that they are indeed straight—Kevin is married with three sons and a foster daughter, and Brandon has a daughter with his ex-wife.

That’s right, folks. Brandon and Kevin, now 47, really were roommates, just like they said. Neither identifies as gay. And both went on to become good, old-fashioned, heteronormative “family guys.”

But not everyone’s happy with this new development.

I must admit, I was happier in my Supermarket Sweep fantasy, where Brandon and Kevin have somehow beaten the odds, have remained together and own a nice little B&B in Vermont.

I had a whole backstory made up for these guys. Brandon definitely was the one to invite Kevin to bible study. They crushed it and they don’t need drugs or alcohol. #SupermarketSweep

ABC just announced that it’s bringing back Supermarket Sweep with Leslie Jones as host this fall. Perhaps Brandon and Kevin will make a comeback?

#SupermarketSweep is BACK 🤩 This iconic game show is coming soon to Sundays on ABC! pic.twitter.com/Q1k07fPUYE