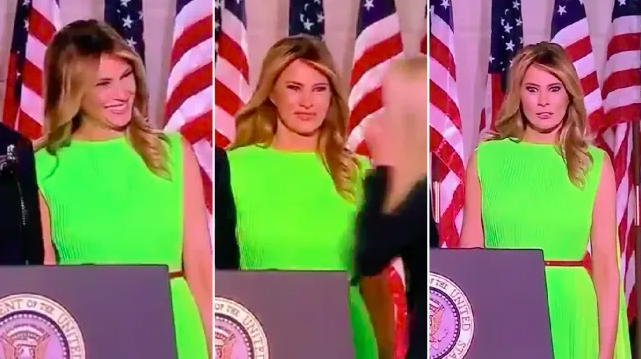 But nobody’s really talking about any of them. Instead, everyone’s talking about the awkward exchange of smiles between First Lady Melania Trump and former handbag designer Ivanka Trump right after Ivanka introduced her dad before his speech formally accepting the Republican presidential nomination.

Hmmm. Where have we seen that expression before?

I see that Melania and Ivanka are getting along juuuuust fine. pic.twitter.com/ktnmRBBG7Q

The disdain she has for Ivanka is all of us. #BeBest

Makes you wonder what Ivanka whispered to Melania as she passed by. pic.twitter.com/v43wkZM0yH

Exclusive footage of Ivanka and Melania before the event
✌ pic.twitter.com/zv1Y21HzY0

Hahaha! This outdoes the inauguration stank

Melania loathing Ivanka is the only time she’s ever even tried to make most Americans empathize with her. pic.twitter.com/9Q50IRkA0g

Call it a hunch, but I don’t think Melania likes Ivanka very much. On that, we can agree. #BeBestpic.twitter.com/bqIN6ytR3m

Related: Don Jr. swears he wasn’t coked out of his mind at RNC, blames bad lighting for sweaty face