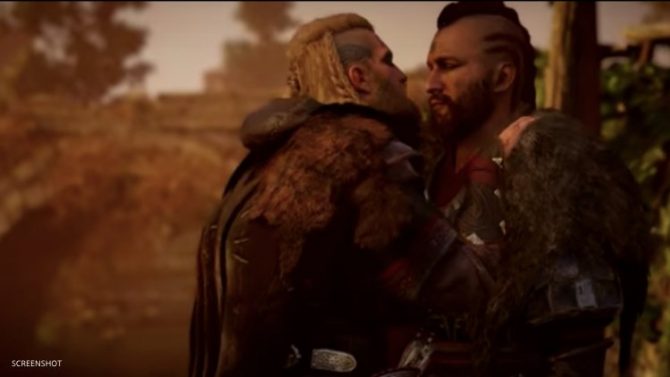 Gay gamers are in for a treat.

A new clip from Assassin’s Creed: Valhalla has been circulating online and it shows two vikings–Eivor and Broder–engaging in gay sexual intercourse.

In the clip, Broder is seen approaching Eivor, the lead character, as he is examines a wild boar on a table.

“The boar represents fertility,” he tells Eivor. “Did you know that?”

Broder then goes on to say he is “impressed” by Eivor’s strength of character and how he is “skilled in so many ways.”

“Yet I wonder,” he continues, “Is there any skill of mine that I could impress upon you?”

To which Eivor coos in response, “Even a fool has something to teach, whether they’re aware of the lesson or not.”

“Aye, aye,” Broder says. “But I could show you how to wield my plough-sword.”

If they select option 1, Eivor responds, “Be plain about it, stiff-spear. You want to lay with me, is that it?”

“That I do,” says Broder. “Will you follow me? To a place more comfortable?”

“A good plough-sword is a rare thing,” replies Eivor. “Lead the way.”

The whole thing has people on Twitter feeling very excited…

Once again @UbisoftANZ on the forefront of LGBTIQ+ representation! Looking forward to playing as a big gay ass Viking ??? https://t.co/O2sXOn2tpq

It's neither of those

"Gay Vikings shouldn't exist because there was no AIDs medication in viking times"???

No one tell him that AIDs wasn't a problem for humans until the 20th century ????https://t.co/mIoNEuAioO

Ubisoft, the company that produces Assassin’s Creed: Valhalla, says it has long planned on opening up Eivor’s romantic prospects.

In a recent interview with IGN News Live, the game’s host and writer Youssef Maguid explained that “there are multiple people you can romance in the game, and you can romance all of them as either gender.”

Subscribe to Queerty for a daily dose of #entertainment #assassin’screed:valhalla #gaysex stories and more