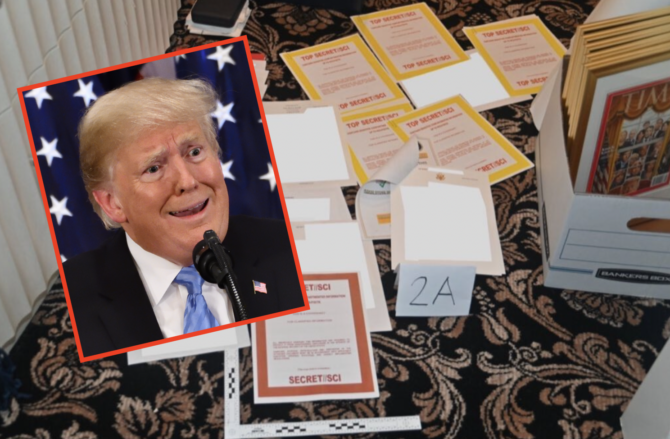 The Justice Department filed a response late last night to Donald Trump‘s request for a federal judge to appoint a “special master” to review the records seized from Mar-a-Lago earlier this month and, once again, things look pretty grim for the one-term, twice-impeached ex-president.

In its 36-page filing, the DOJ argues that FPOTUS’s request for a special master “fails for multiple, independent reasons,” and accuses him of leveling “wide-ranging meritless accusations” against the U.S. government.

Unlike Trump, however, federal prosecutors don’t just hurl wild accusations around without offering any evidence to support their claims. They have receipts. Lots of them.

The filing goes on to explain that FBI agents recovered a total of 33 boxes containing more than 100 highly classified documents stashed in the ex-president’s home office when they searched Mar-a-Lago on August 8.

The information contained in the documents is so sensitive, it adds, that FBI counterintelligence agents tasked with reviewing the materials needed additional security clearances. Thus, appointing a special master “is unnecessary and would significantly harm important governmental interests, including national security interests.”

Related: Mary Trump has some thoughts about the explosive Mar-a-Lago affidavit that was just released

But federal prosecutors didn’t stop there. The filing also explains that the DOJ tried for months to get the documents back from Trump prior to August 8, but to no avail.

The timeline laid out by the Justice Department made clear that the extraordinary search of Mar-a-Lago came only after other efforts to retrieve the records had failed, and that it resulted from law enforcement suspicion that additional documents remained inside the property despite assurances by Trump representatives that a “diligent search” had accounted for all of the material.

It also included a picture of some of the seized documents bearing clear classification markings, perhaps as a way to rebut suggestions that whoever packed them or was handling them could have easily failed to appreciate their sensitive nature.

The photo the DOJ submitted with the filing is peak Trump. It shows a pile of government documents marked “TOP SECRET//SCI” and “SECRET//SCI” spread out across the gaudy black and gold carpet at Mar-a-Lago. Beside them is a banker’s box of tacky gold-framed picture frames, including a Time magazine cover.

There they are, folx! Our nation’s most top secrets sitting on the floor of the ex-president’s home office in Florida.

In a post on his Truth Social page today, Trump claimed he declassified all the records shown in the photo, writing: “Terrible the way the FBI, during the Raid of Mar-a-Lago, threw documents haphazardly all over the floor (perhaps pretending it was me that did it!), and then started taking pictures of them for the public to see. Thought they wanted them kept Secret? Lucky I Declassified!”

But the DOJ says his team never “asserted that the former president had declassified the documents or asserted any claim of executive privilege.”

Trump has until 8PM tonight to submit a response to the DOJ’s filing. U.S. District Judge Aileen Cannon, who was appointed by Trump in 2020, is set to hear arguments on the matter tomorrow.

NEW: Trump and his team repeatedly failed to hand over classified documents, and their efforts to keep the papers at his Mar-a-Lago home constituted obstruction of a criminal investigation, prosecutors told a federal judge late Tuesday in a 36-page brief.

It is not hyperbole at this point to assert that the Mar-a-Lago classified documents seizure is a much bigger scandal than Watergate ever was.

We must have accountability.

These are some of the documents the FBI recovered from Mar-A-Lago as they disclosed in a court filing last night. If they look serious, it’s because they are, and some of the markings even suggest human source intelligence, materials people risk their lives to gather and protect. pic.twitter.com/T7mApwnyZf

DOJ says it seized some of the classified documents from inside Donald Trump’s Mar-a-Lago desk. GAME OVER.

Once Trump goes to jail, they should turn Mar-a-Lago into a homeless shelter.

One of the key parts of the DOJ's filing that stood out to me was that some of the documents at Mar A Lago were so classified, even FBI agents and DOJ attorneys had to wait for increased security clearance to view them.

donald trump is freaking the fuck out. And it’s absolutely glorious.

"They keep coming after Trump!"

Dudes. Trump hasn't been mired in criminal investigations because people hate his haircut or tacky buildings.

It's because he is a career criminal who keeps getting caught. But now, he no longer has the power of the presidency to protect himself.

Correct me if I'm wrong, but Trump is now under investigation for tax fraud, election fraud, insurrection and violating the Espionage Act. And he's the Republican frontrunner for 2024

In other Trump news, the RNC has finally–finally!–cut him off and says he’s going to have to pay for his own legal expenses when it comes to this whole Mar-a-Lago mess. Until now, GOP donors have been footing the bill for all of the investigations into the ex-president’s alleged bad behavior.

That ends today. Or rather, yesterday.

Trump will have to pay on his own. A person familiar with the matter confirmed that the Republican National Committee is not paying for Trump’s legal fees related to the FBI’s investigation and retrieval of documents at Mar-a-Lago. That’s a departure of sorts from the past. The RNC has, for example, paid for Trump’s legal bills involving New York Attorney General Tish James’ investigation into the former president’s private businesses.