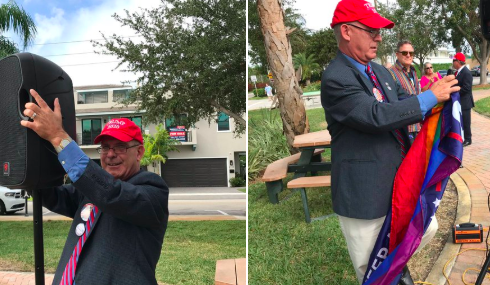 A gaggle of gay Trump supporters gathered for their own MAGA rally in Wilton Manors, Florida on Monday. Unfortunately, things didn’t go as planed.

Members of the Broward County Log Cabin Republicans were reportedly outnumbered 3-1 by counter protesters. Not just that, but they experienced sound problems when their loudspeaker failed.

It wasn’t our fault their sound system failed them. Activism 101, make sure your tools and message can be heard. pic.twitter.com/8pI8VOnu2A

About 12 people turned out to listen to Andrew Brett, president of the Broward County Log Cabin Republicans, gave an impassioned speech about how much he hates Muslims, why President Trump’s impeachment is a witch hunt, and how terrible Democrats in the U.S. House Representatives are during a rally outside Wilton Manors City Hall Monday morning.

“The Democratic Party has become the party of division in America,” Brett ranted to the his audience of one dozen. “Whereas, the Republican Party is the party of inclusion for all Americans.”

Meanwhile, about three dozen counter protestors also showed up, waving signs and chanting over Brett’s hate speech, which nobody could hear anyway because the loudspeakers pooped out.

A small sample of the speech given today by Andrew Brett, president of the Broward Log Cabin Republicans. I took the liberty to circle his typos. Needless to say, Brett is willfully ignorant of @DWStweets & @TedDeutch leadership on #LGBT issues. @browardpolitics @SFGN pic.twitter.com/nPy7FQggjG

LGBTQ activist Michael Rajner led the counterprotest. He tells South Florida Gay News that his being there was about protecting future generations of queer people.

“I think it’s important to be here because generations that follow us will be subject to the horrible laws and punishments from this administration if [Trump] should be reelected,” Rajner says. “He’s appointed some terrible judges that are hostile to the LGBT community, and our protections are eroding so quickly.”

“We must stand up, we must register to vote, and we must get the community to mobilize to stand up against this hate.”

Related: Right-wing YouTuber tries to shame man for giving out “free BJs” but it totally backfires