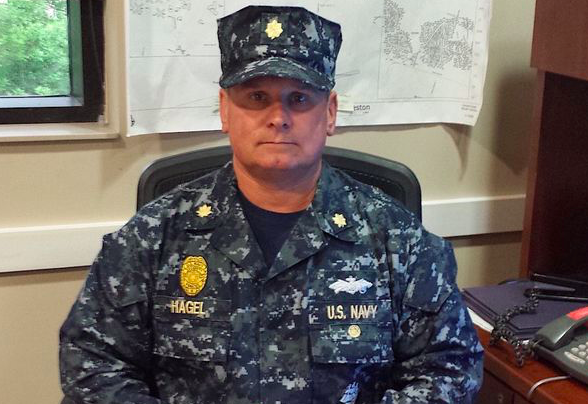 A retired police officer was just awarded $1.8 million after it was determined by jury that the police chief discriminated against him for being in the military and because be believed the officer was gay.

50-year-old Kenneth Hagel worked as a Sea Girt police officer and was a member of the U.S. Navy Reserves in Lakehurst, New Jersey for more than 30 years, during which time he was deployed to Kuwait, Guam, and Spain.

The former cop claimed in a lawsuit filed in 2014 that Chief Kevin Davenport falsely believed he was gay and discriminated against him because he was in the military and required to leave his police job periodically for training and overseas deployments.

Hagel filed suit in Monmouth County Superior Court against Davenport, the police department and the borough. The Navy man claimed the chief engaged in a pattern of sexual harassment and discrimination.

For the record: Hagel identifies as straight and is married to a woman. But this didn’t stop Chief Davenport from repeatedly hurling homophobic slurs and abuse at him and refusing to promote him on two separate occasions.

“The trouble started when Davenport was promoted to sergeant and took over scheduling,” Hagel’s attorney, Matthew A. Peluso, told a court this week.

According to the lawsuit, some of the abuses Davenport is accused of include:

As a result, Hagel claimed he was wrongfully denied a promotion in both 2013 and 2014 due to anti-military and antigay discrimination by Davenport.

He also claimed that because of his boss’ abusive behavior, fellow officers started believing the untrue rumors about him.

This week, a jury determined Davenport had “engaged in egregious conduct against” and found him guilty of discrimination. Hagel was awarded $262,800 in compensatory damages for lost salary and benefits, $500,000 for emotional distress, and $1 million in punitive damages.

still not getting it
16