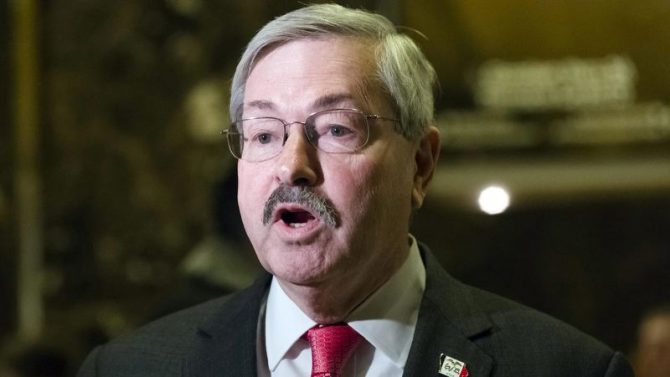 Former Republican Gov. Terry Branstad of Iowa and Donald Trump‘s Ambassador to China thinks it’s absolutely absurd that a former government employee he once discriminated against for being gay has been awarded $1.5 million.

Last month, a jury found Branstad guilty of discriminating against Christopher Godfrey, the former Iowa Workers’ Compensation Commissioner, because Godfrey is gay. Now, Branstad wants the ruling thrown out. Because, he says, it’s just not fair!

Quick backstory: Godfrey was originally appointed to a six-year term by Branstad’s predecessor, Democrat Chet Culver. After Branstad took office in 2010, he asked Godfrey to resign so he could appoint someone else to his job.

When Godfrey refused, citing a law intended to prevent partisan politics by declaring holdouts can retain their positions between administrations, Branstad responded by slashing his salary almost $40,000, from from $112,070 to $73,250, effectively driving Godfrey out.

But here’s the thing: Other Culver appointees who refused to resign did not have their salaries cut. The only difference between Godfrey and them was that they were all straight.

And here’s the other thing: Branstad has a history of opposing LGBTQ equality. Not only has he gone on record to say he believes marriage is “the union of one man and one woman,” but he supported an amendment blocking same-sex marriage.

Eight years later, in July 2019, a jury finally declared Branstad had, indeed, discriminated against Godfrey because of his sexual orientation.

“I have always treated everyone, gay or straight, with respect and dignity,” Branstad, who claimed he didn’t even know Godfrey was gay until he threatened to sue, insisted at trial. “That’s the way I have always operated.”

In response, Branstad’s team just filed an appeal on the verdict, calling the whole case a “charade” and “a political circus” and saying the $1.5 million award is “excessive.”

“Defendants can only pray that the trial phase of the Godfrey saga will be viewed by history as the low point in a dangerous era of Iowa jurisprudence,” his lawyers argued this week. “All citizens of this state should hope that the Godfrey trial will not be remembered as a harbinger of the end of the American democratic experiment.”

But Godfrey’s attorney, Roxanne Conlin, isn’t having any of it. She says she’s confident in the jury’s verdict.

“This jury decided that former Gov. Terry Branstad discriminated against Chris Godfrey because he was gay and then retaliated against him after he refused to resign,” Conlin said. “That is the fact that was decided by the jury and that cannot be overturned.”