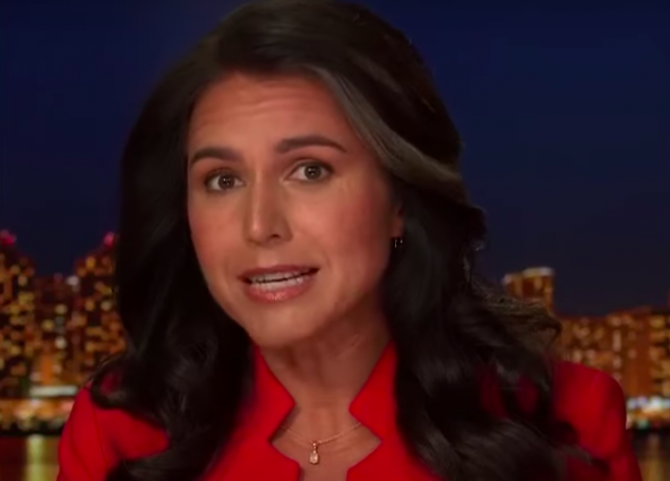 Tulsi Gabbard’s at it again, folx!

This week, the ex-LGBTQ ally went on Fox News to once again push her eye-rolling narrative that Hillary Clinton conspired with the “Deep State” to kill her chances of being president in 2020.

Appearing on Fox News Primetime to take what she called “something of a victory lap” after attorney Michael Sussmann was indicted for “not disclosing his ties to the Hillary Clinton campaign when he reported damaging information about former President Donald Trump to the FBI,” Gabbard said the indictment was even more evidence of what she’s been saying all along.

“It really points to the fact that we have a situation in our country where the powerful elite, people like Hillary Clinton and those around her—the deep state, the media—they’re all colluding to destroy outsiders who they deem as posing a threat to their power,” she said.

Gabbard went on to say that what Clinton & Co. essentially do is “create this dictatorship” that separates “those who put country first, those who are not afraid to challenge the establishment” from everyone else and then try to “eliminate these outsiders if they indeed pose a threat to their power.”

Riiiiight. We’re sure Tulsi’s failed presidential campaign had to do with that nonsense and not the fact that she was running in a very crowded field of extremely qualified candidates and, oh yeah, she has a looooong history of advocating for antigay causes, which is generally something most Democrats find disqualifying these days.

When asked whether Clinton caused harm to her pristine public image, Gabbard answered in the affirmative before comparing herself… to Donald Trump?

“This happened to me. It also happened to Donald Trump. This is not about Democrats or Republicans. It’s about their concerted and collective effort working together to destroy and silence who challenge their power.”

Hmmmm. We’re not sure comparing yourself to Donald Trump on Fox News is the smartest way to get Democrats to support you. Of course, when it comes to smart campaign strategies, Gabbard’s record is far from exceptional.